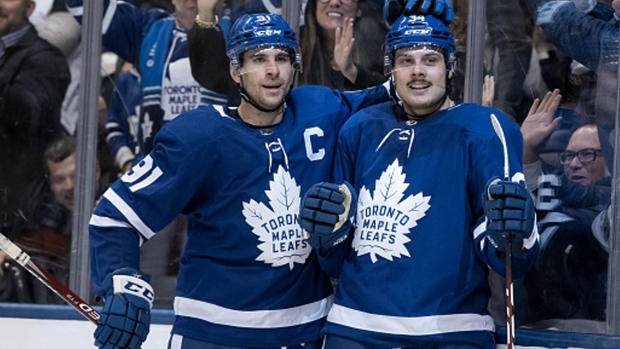 The Maple Leafs held a 10:30 a.m. optional morning skate at Scotiabank Arena, ahead of facing the New York Islanders at 7 p.m.

The Maple Leafs have had a dominant month offensively, scoring more goals (59) and averaging more goals per game (4.21) than any other NHL team since Dec. 1, while also boasting the best power play in the league over that stretch (36.4 per cent). And head coach Sheldon Keefe doesn’t miss a beat in explaining how the uptick in output came about.

“[We have] good players,” he said after the Leafs' optional morning skate on Saturday, before facing the New York Islanders. “We [try to] put our guys in good spots to succeed and they have the ability to do that. We believe in our group's ability to execute and get their chances at five-on-five and then our power play has been a significant factor in terms of consistently giving us a goal per game for the most part. And that's led to success for us offensively.”

Toronto heads into Saturday’s tilt against the Islanders on a nine-game point streak, over which the team is averaging 4.75 goals-per-game. Not since the 1993 Pittsburgh Penguins has a club been able to score at least four goals in at least 10 consecutive games, but through some creative maneuvering of his forward lines over the last few weeks, Keefe’s group is in a position to accomplish that feat.

“I think we're adapting to a lot of the things that Sheldon's brought in,” said John Tavares. “And with the skill and depth we have, the trust and the talent amongst us, I think there's a good balance with that. And also the accountability in all three zones and being smart with the puck and not trying to do too much or force the issue, but take what's there and generate the offence that we need to and just try to be a tough team to defend by controlling the play.”

The keys for Keefe have been identifying where tactical changes needed to be made within the Leafs’ offensive structure, and then having a willingness to try players in different spots until the chemistry clicked.

“A lot of what we're doing is trying to put the good players in position to succeed and they've done well with that,” Keefe said. “So whether that's tactical pieces or whether that's ice time or situations that we're putting them in five-on-five and on the power play, we're just trying to have the right people out there and give them a chance and when those guys have opportunities they tend to make good on it more often than not, and right now they're feeling it.”

One of the strategic adjustments Keefe has made is to lean heavily on his top two lines – anchored by Tavares and Auston Matthews – early in games, giving them extra shifts out of the gate to try and to give Toronto an upper hand from the get-go.

“We want to try to play with a lead as much as we can,” Keefe explained. “That was an area when the team was going through a tough time that it wasn't playing with the lead very often. So part of it is trying to get ahead and part is also just trying to get those guys lots of touches and lots of feel in the game early on, and then we can establish a lead, expand on that a little bit more and rely on our depth to keep everybody fresh and get the job done.”

Saturday’s game isn’t part of a back-to-back situation for the Leafs, but Keefe tapped back-up goalie Michael Hutchinson for the start against New York anyway, in part because the Leafs have no back-to-backs until February.

“We're well aware of the fact that we need to get some more games out of our backup,” Keefe said. “And we just thought today, coming back from [a two-game road trip] and looking at it, we felt that if we didn't get Freddie [Andersen] the rest this week, there probably wouldn't be any until after the break. And then with that in mind, it would be a long time between starts for Hutch so we just thought that with all those things in mind that today it made some sense to get him in there.”

Hutchinson had a rough start to the season, going 0-6-1 through his first seven starts. The journeyman eventually earned his first victory of the year on Dec. 21 against Detroit, and followed it up with another win over the New Jersey Devils on Dec. 28, giving up five goals-against over the two starts.

Semyon Varlamov is projected to start for the Islanders.

In the midst of the Leafs’ recent offensive success, William Nylander has emerged as one of Toronto’s most impactful forwards, pocketing 11 points (six goals, five assists) in his last five games.

That surge coincides with when Keefe slotted Nylander onto Tavares’ flank, and the instant chemistry between them has not only boosted Tavares’ numbers as well (10 points in five games) but given him a creative new linemate to feed off of.

“Willy's extremely talented so he's very easy to play with,” Tavares said. “I think he's very underrated in his ability to protect the puck and his strength on it. He does a lot of good work down low along the boards and in the offensive zone protecting the puck and creating space, so I'm just trying to find open ice. He's always got his head up; he's looking for the open man. I think he's an extremely competitive person, so I know how badly every night he wants to make a difference and I think we just try to play off one another and understand each other's games.”

Nylander’s best stretch of this season also happened to come after Keefe benched him for most of the second period on Dec. 21 against Detroit, limiting the winger’s ice time to just 2:20 over three shifts. But Keefe doesn’t correlate his sending a message with Nylander’s turnaround.

“This is what I think he's capable of,” Keefe began. “But I don't think it's in response to that [benching] necessarily, I think it's more just that he's found some good chemistry here between him and John, and also he's just feeling it. He's going through a really positive stretch and he's the type of player that when he's feeling good and feels he has the puck a lot that he's going to gain confidence through that. I don't think he's ever a guy that's short on confidence, but it's when you're on the ice and you're touching the puck and you're feeling like everything's coming through you, it really helps you a lot.”

Injured forwards Andreas Johnsson (leg) and Trevor Moore (concussion) both took part in the Leafs’ optional morning skate on Saturday, after they returned to on-ice activity during the club’s recent road trip.

Johnsson, who was hurt on Dec. 4 against Colorado, wore a red no-contact sweater for the session, while Moore (out since Dec. 23 with a concussion) was in a regular jersey but hasn’t been cleared either for a return.

“[It’s] very encouraging,” Keefe said. “They were skating a little bit while we were away, so today was a positive step. Both are still in non-contact situations, but just to see them around the building and around the group is a good sign.”

Toronto has found ways to win despite the many injuries its suffered – including to Jake Muzzin and Ilya Mikheyev – but it still means something for players to have their teammates inching closer to a comeback.

“We've had great contributions [from other players] but anytime you get guys back that have made a big impact for us in the past and have been a huge part of what we're doing is always huge,” Tavares said. “And it's exciting for them and I think for the group as well knowing the impact they can make for us.”