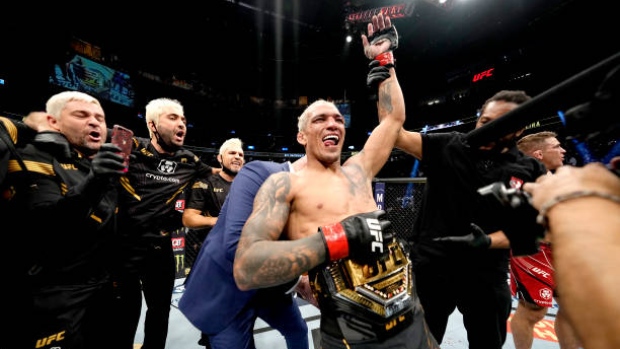 Poirier battered the champ with punches in the first round and knocked him down twice, but Oliveira took control on the ground in the second round with a series of vicious elbows. He finished the fight with 3:58 left in the third by attaching himself to Poirier's back and forcing him to tap while standing up.

Oliveira finally claimed the belt last May in his 28th UFC fight -- the longest wait for a title in the promotion’s history and the culmination of an epic journey by a Brazilian veteran who overcame poverty and childhood illness to become an elite jiu-jitsu practitioner and mixed martial artist.

Oliveira set the UFC record for stoppage victories by beating Michael Chandler with punches, and his finish of Poirier increased the record to 18.

Poirier already had a spectacular 2021 with his two victories over Conor McGregor, erasing the vaunted former champion’s winning mystique and making two enormous paychecks for decisive stoppage wins. Poirier's only other loss in his last 11 fights since 2016 was to Khabib Nurmagomedov, who took away Poirier's interim lightweight title before retiring undefeated.