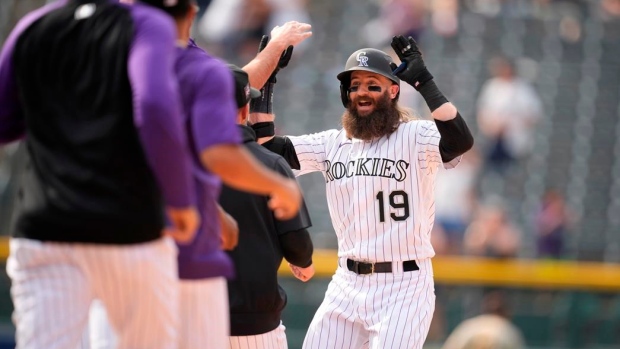 DENVER (AP) — Pinch-hitter Charlie Blackmon singled home the winning run in the ninth inning and the Colorado Rockies shook off a monster homer by Fernando Tatis Jr. to beat the stumbling San Diego Padres 8-7 on Wednesday.

Tatis hit a 477-foot homer, the longest of his career and his NL-leading 21st. He also doubled, but the Padres lost for the 13th time in 17 games.

The Padres are home for the next 10 games, starting with four against the surging Cincinnati Reds.

“I promise you we’re going to be OK,” outfielder Jurickson Profar said. “We’re too talented for things to keep going this way.”

The gametime temperature was 99 degrees at Coors Field, and the hot weather contributed to a big offensive day. The teams combined for five home runs and 24 hits and neither starter made it out of the fourth inning.

After an error in the ninth inning helped the Padres score a run that made it 7-all, the Rockies won it. Trevor Story drew a leadoff walk from Austin Adams (2-1), stole second and scored when Blackmon hit a 1-2 pitch into center field.

“You’ve seen that out of our group that resiliency out of our group has shown up,” manager Bud Black said. “The guys know a ballgame is never over, they play all 54 outs and if we have to go 10 (innings) we’ll go 10.”

Raimel Tapia had three hits to extend his hitting streak to 13 games, the longest of his career, and C.J. Cron homered for the second time in the series for the Rockies.

Colorado improved to 23-14 at Coors Field, which is in stark contrast to its 5-27 record on the road.

“Our confidence is really high at home,” Story said. “We’re playing really well at home right now and obviously the challenge is to recreate that on the road.”

The Rockies led 7-6 in the ninth, but Carlos Estévez (2-0) walked the first two batters in the ninth and second baseman Brendan Rodgers’ throwing error allowed the Padres to tie it on a sacrifice fly.

Colorado starter Kyle Freeland gave up two homers in 3 2/3 innings and has allowed nine longballs in his last three starts.

Tatis hit a solo drive and Trent Grisham had a two-run homer in the third to make it 3-all. he Padres went ahead 5-4 in the fourth on consecutive doubles from Tatis and Manny Machado.

Rockies: RHP Jon Gray (right flexor tendon) will throw a bullpen session on Thursday instead of a simulated game. Black said if all goes well Gray could head out for a rehab start with Triple-A Albuquerque.

Story’s run-scoring double in the first inning was the 400th RBI of his career, the 13th Colorado player to reach that number. He is 1,005 RBIs behind all-time Rockies leader Todd Helton.

“It was a cool accomplishment but on to the next,” Story said.

The 99 degrees at first pitch is the second-highest temperature in Coors Field history. The hottest came June 25, 2012, when it was 100 degrees. Monday and Tuesday the gametime temperatures were 98 degrees.

Wednesday marked seven years since San Diego great and Hall of Famer Tony Gwynn passed away at age 54 from salivary gland cancer. Gwynn played 20 years in the majors, all with the Padres, and finished his career with 3,141 hits and a .338 batting average.

The Padres optioned LHP Ryan Weathers to Triple-A El Paso and recalled RHP James Norwood. Norwood made his San Diego debut by getting the final two outs of the fourth inning.

“It’s best for him to stay in turn, get his starts and get his bullpen in between starts and continue to build,” Tingler said of Weathers.

Rockies: RHP Germán Márquez (4-6, 4.60) makes his sixth career start against Milwaukee on Thursday night in the opener of a four-game home series.