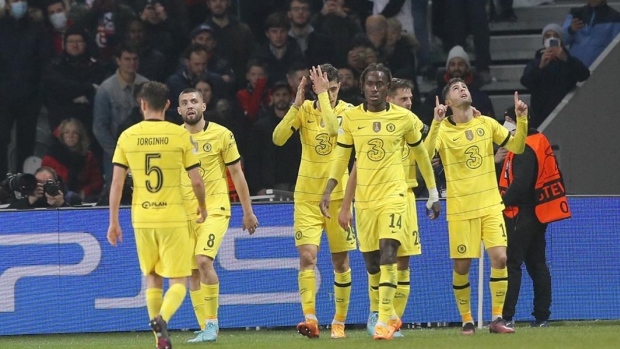 LILLE, France (AP) — Much remains uncertain about Chelsea's future, but for now the reigning champion is through to the Champions League quarterfinals.

U.S. international Christian Pulisic converted one of Chelsea’s rare chances and Cesar Azpilicueta added another goal Wednesday to help the embattled Premier League club progress with a 2-1 win at Lille, and 4-1 on aggregate.

Chelsea, whose future has been left in doubt after Britain and the European Union froze the assets of owner Roman Abramovich, did not create much but was clinical against the French league champion.

Pulisic canceled out a penalty from Burak Ylmaz with a goal at the stroke of halftime and Azpilicueta scored the winner in the 71st minute.

“They gave us a lot of problems in the first half,” Pulisic said. "It was a really important goal right before the half, and from there I think it gave us some confidence.”

Abramovich’s assets were frozen after he was sanctioned over his ties to Russian President Vladimir Putin following Russia's invasion of Ukraine.

Under the British government action, Chelsea will operate through the end of this season with a special license that among other restrictions prohibits the team from selling new tickets or merchandise, or signing new players.

Abramovich, whose $2 billion investment in Chelsea over 19 years transformed the team into a force in European soccer, had put the club up for sale even before those measures were announced, amid growing calls for his name to be added to the list of sanctioned oligarchs.

The owners of the Chicago Cubs said Wednesday that they will make a bid to buy the Premier League club.

“It has not been a normal last few weeks but we have to do what is in our hands, which is train the best we can," Azpilicueta said. “Tonight it was a difficult game and of course we are happy to go through."

Looking for an early goal, Lille started the game with a spell of intense pressure and camped in Chelsea’s half.

The hosts won duels in midfield and their dominance materialized with a first scoring chance after seven minutes when Burak Ylmaz had an effort from 20 meters blocked.

With a comfortable lead from the first leg, Chelsea did not take any risk and was content to patiently wait for an opening with a fluid passing game. The visitors gradually grew into the match and Mateo Kovacic caused real problems to the Lille backline with his bursting runs and quick dribbles.

There was a change in dynamics soon after the half-hour mark when Andreas Christensen had to leave the pitch injured. He was replaced by Trevoh Chalobah, who was immediately nutmegged by Jonathan David on the side of the area and conceded a free kick.

Lille’s opener came from the subsequent move as Jorginho involuntarily blocked the ball with his arm in the area, prompting Lille players to shout for a penalty that was awarded following a VAR check.

Ylmaz took it and fired the ball into the top corner past Chelsea goalkeeper Edouard Mendy in the 38th minute.

Lille could not hang onto the lead for long, though. The hosts were punished after Jorginho picked out Pulisic in the box with a perfectly weighted pass that the American forward slotted into the net at the far post from a tight angle.

After the break, Lille threatened again with a fine header from Ylmaz that sailed just inches wide. Portuguese midfielder Xeka came even closer in the 64th minute with a powerful header from Ylmaz's pinpointed cross that crashed onto the post.

Lille’s hopes were dashed for good when Azpilicueta beat goalkeeper Leo Jardim at the end of a good spell of possession. Left unmarked, the former Marseille player connected with a cross from Mount and sent the ball into the net with his right knee.

Timothy Weah came off the bench for Lille in the 58th minute, making it the first time two Americans played against each other in a Champions League knockout game.