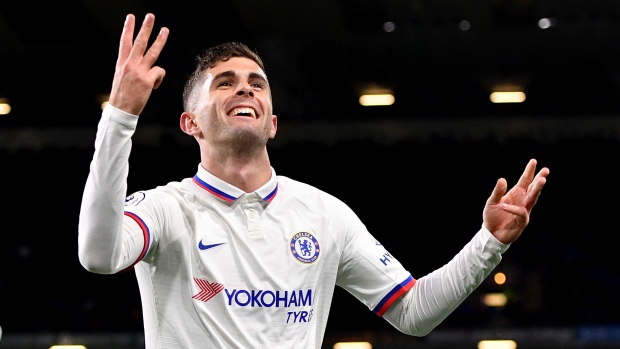 LONDON — Chelsea winger Christian Pulisic faces six weeks out with a right hamstring injury that could see him miss the start of the English Premier League.

The American was injured last Saturday in the 2-1 loss to Arsenal in the FA Cup final after scoring at Wembley Stadium.

“With Christian Pulisic I think it’s going to be touch and go for the start of the season,” Chelsea manager Frank Lampard said on Friday. “We’re probably looking around a six-week injury. So with six weeks, doing the maths, it gets very close to, and is probably into, the start of the new season. But we have to treat it right, the injury.”

Pulisic had 11 goals and eight assists in his first season at Chelsea after joining from Borussia Dortmund.

“In the big scheme of things with Christian, when he reflects on his first season, the improvement levels coming here when you think of the goals and assists he’s had this year, it’s the best of his career,” Lampard said. “And that’s his first year in the Premier League. From where he’s gone at the start to how he’s ended up and how he has played in the restart, he should be very happy, and that’s down to his work.

“So we’ll get him fit, and get him ready. If he misses the first one or two games of the season, then we’ll have a firing Christian hopefully as hungry as he looked for the restart.”

Chelsea's season continues in the Champions League, with the London club trying to overturn a 3-0 deficit against Bayern Munich in the pandemic-delayed round of 16 on Saturday.