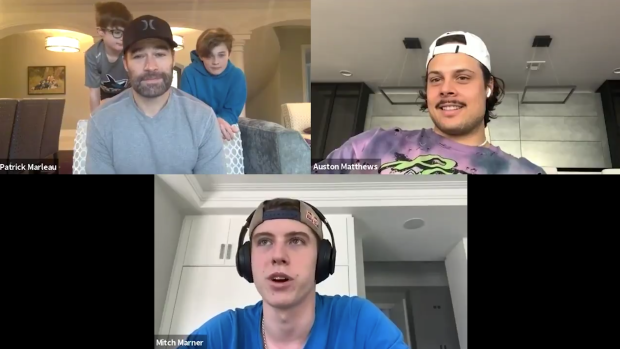 It was just like old times for Maple Leafs forwards Auston Matthews and Mitch Marner on Monday, sitting down to chat with their close friend and former teammate, Patrick Marleau.

Only this time, the conversation was happening over a Zoom conference call set up by the NHL, as the league begins its fourth week on pause in response to the global COVID-19 pandemic.

The technological barrier didn’t do much to diminish the trio’s chemistry though, forged as it was over the two seasons they played together for the Leafs.

Checking in from their homes in San Jose (Marleau), Phoenix (Matthews) and Toronto (Marner), the three had plenty of fun tackling several rounds of the Newlywed Game and revealing how they’ve stayed busy since the NHL’s stoppage.

Throughout the 30-minute video call, Marleau was joined in the frame at times by each of his four sons – Landon, Brody, Jagger and Caleb – as well as wife Christina.

Being a father has presented different challenges for Marleau during this time off than it has his younger counterparts, the least of which has been keeping the kids entertained with activities like rollerblading through the house.

“I'm not gonna lie, the homeschooling thing has been a little tough on me,” Marleau said. “But it's been going good. This week they're off [for spring break], so it's a good week to take a break here and regroup for the next week of homeschooling.”

Matthews, meanwhile, invited a friend to stay and isolate in Arizona at his off-season home.

“I'm in Phoenix right now, and [Leafs’ goaltender] Freddie Andersen's here with me,” Matthews shared. “Just been kind of hanging out by the pool, just chilling and enjoying the sun for a bit.”

At Marner’s place in Toronto, he and his girlfriend are holed up with their puppy, watching TV shows and taking walks along a pathway.

But it started getting a little chaotic there during the call, when Marner’s dog needed some attention and, of all things, his landline phone started to ring in the middle of Marleau answering a question, forcing Matthews to playfully chastise him with a, “Mitch, please!”

“I've been here for like three weeks, I've never heard that once,” Marner pleaded. “I thought it was one (of) you guys. I don't know what that was. Sorry, Pat.”

“It was gonna be an epic answer, but it's totally gone now,” Marleau replied. “I don't even know what I was talking about.”

By now, the story of how Marleau bonded so tightly with two players half his age has become part of recent Leafs’ lore. And the three of them were happy to hash out the feel-good tale one more time.

“[Marleau] was pretty quiet the first couple weeks [he was a Leaf], he didn't really talk to me at all, he was avoiding me,” Matthews recalled. “And then on one of our first road trips, I don't even know who I went to dinner with, but then when I got back [to my hotel room], [Marleau] was in Mitch's bed with Mitch and waiting for me and we were gonna watch a movie and it was Cars 3. And then it became like a tradition, every road trip we'd put on a movie and order dessert.”​

The relationship would eventually come to include many visits to the Marleau homestead in Toronto, where his four boys gave Marner and Matthews all they could handle in mini stick battles.

“Every time we went after [the first time], we brought an extra pair of clothes and some shorts and T-shirts because we knew we were going to get all sweaty playing mini sticks for hours,” Marner said. “So, I think that's where the relationship really started is when we started going over there and hanging out with the kids and just kind of feeling like really we were a part of the family.”

“I always had a good time, and mini sticks got intense,” added Matthews. "The Apple watches were broken. It was always a good time.”

On the call, several questions were posed to the players by a moderator about one another and they were made to answer, Newlywed Game-style, with written answers revealed all at once. And nearly all of them were unanimously correct.

Marleau’s wife, Christina, also popped in with a few questions of her own for the group, including who was most likely to binge-watch the Netflix series Love is Blind (answer: Matthews).

Some of the other revelations:

Marner’s favourite ice cream flavour is chocolate cookie dough, and he’s the most likely to be surviving on pizza. Matthews was deemed most likely to run out of clean clothes the quickest with no help and who takes the longest to get ready for dinner. Marleau was credited with most often paying for dinner on the road.

Generally, it’s the loser of the “credit card game” who gets stuck with the bill (that’s where all diners put their credit cards on the table and whichever one is randomly selected gets the cheque), but to help stymie Marleau’s bad luck in that department, the trio devised another game, whereby whomever touched their phone to scroll through social media or text during dinner would be automatically saddled with payment responsibilities.

However, there still had to be another exception made to protect Marleau.

“[Inevitably], Patty would get a call from Christina, or one of his kids,” Matthews laughed. “And he would lose.”

“So we made a rule that the phone answer was allowed for Pat,” finished Marner.

4. Blowing up with Bieber

Matthews’ burgeoning friendship with pop star Justin Bieber has garnered plenty of headlines this last year, and did so again on Sunday when Matthews joined Bieber for an Instagram Live on how they’re coping with self-isolation.

“He just messaged me in the morning [on Sunday] and asked if I wanted to go on Instagram Live with him,” Matthews explained. “I don't have much going on right now, so I was like, 'Yeah, no problem.' We talk every once in a while, he's a pretty busy guy, so I try not to really bother him too much but obviously it's been pretty sweet to get to know him and spend time, just kick it and have fun.”

Asked how many goals he thinks Bieber could score on St. Louis Blues netminder Jordan Binnington, who he is expected to face in a shooting contest for charity at some point, Matthews is optimistic about his new pal’s chances.

“I think he gets at least one,” Matthews said. “Like I think he can score one.”

5. Ready for a return

While Matthews and Marner are both in their fourth season with the Leafs, Marleau was barely getting used to playing for the Pittsburgh Penguins when the NHL went on pause.

Marleau was traded from the San Jose Sharks to the Penguins at February’s trade deadline, and is eager to get back to work with his new club.

“The short amount of time I spent there was great,” Marleau said. “The guys were great, and it was just a great opportunity for myself to get another shot at winning a Stanley Cup with the Penguins. Everything’s been great with the organization, they've been helpful every step of the way. Looking forward to getting out of the house and getting back to normal and get out there and start playing again.”

Marner echoed that sentiment, and said the Leafs should be using this time to reflect on their own play before the NHL’s stoppage. Like the Penguins, Toronto sits third in its division, with a chance still ahead to participate in whatever form of playoffs the league may be able to orchestrate this summer.

“[Frustration] is high, but there's bigger things than hockey and that's people's lives…staying safe,” Marner said. “I think [the Leafs] were in a little bit of an up- and-down roller coaster ride there for the last couple of weeks [of the season], so I think this is a good time for us to settle down, realize that we had the potential and the team that could do some great things. Our team has been talking a lot. It’s a frustrating time to have this break but I think everyone's just trying to stay ready for that playoff push.”​