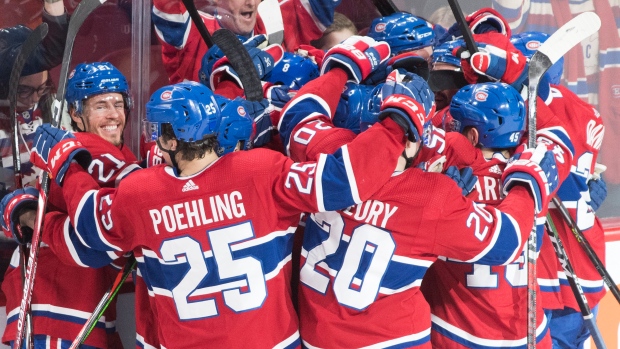 MONTREAL — Cayden Primeau did not have to wait very long for his first NHL victory.

The 20-year-old Primeau made 35 saves in his second NHL start as the Montreal Canadiens defeated the Ottawa Senators 3-2 in overtime on Wednesday.

Primeau, the son of former NHL player Keith Primeau, allowed three goals on 35 shots in a losing effort in his NHL debut against the Colorado Avalanche last Thursday.

"You know you want to get your first win during your first game, but it's a learning experience," said Primeau, a seventh-round draft pick in 2017. "I took that over the weekend and really worked towards it.

"It's been a roller coaster, being able to be called up, especially to a team like this, an organization like this. It's crazy."

The New Jersey native won the tight goaltending battle over Ottawa's Anders Nilsson, who stopped 26-of-29 shots and fell to 0-2-1 all-time against Montreal.

Ben Chiarot scored the overtime winner at 1:11 on a 2-on-1 with Max Domi to give the Canadiens their third win in a row and fourth in their last five.

Montreal (15-11-6) was playing the second half of a back-to-back after beating Pittsburgh 4-1 Tuesday.

Primeau, the best netminder in the NCAA last season, stopped all 12 shots he faced in the first period while dealing with constant traffic in front of his net.

He was even busier in the second when Montreal's loose defensive play led to three odd-man rushes.

The six-foot-three goaltender denied winger Brady Tkachuk on a 3-on-1 midway through the frame, where Tkachuk opted to shoot instead of pass.

Primeau later stopped Jean-Gabriel Pageau on a short-handed 2-on-1 before frustrating Tkachuk again on another fast break 30 seconds later.

"I didn't see the nervousness that I saw in the first period of last game," said Claude Julien of his young backup. "It was another step in the right direction for him. He was calm. He made some big saves.

"I think he has a nice future ahead of him."

Ottawa (13-17-2) overcame a two-goal deficit in the third period after Nick Cousins and Tomas Tatar scored to give Montreal a 2-0 lead.

It took Tkachuk six shots but he finally scored on Primeau, a power-play goal between the pads at 4:30 of the third with Brendan Gallagher in the box for tripping.

Ryan Poehling, recalled from the Laval Rocket this week, nearly gave Montreal a 3-1 lead but Nilsson denied him on the doorstep with his stick flat on the ice.

The Senators tied the game three minutes after that. Tkachuk stole the puck from defenceman Otto Leskinen and quickly fired on Primeau, with Connor Brown there to cash in the rebound at 13:05.

"Especially in a building like that, it was a good effort by us down by two goals in the third," said Sens defenceman Thomas Chabot. "To battle back and get a point on the road, we're proud of that.

"We stuck to it, even down two. We kept putting pucks low, working their defencemen, taking out their speed, not allowing them to make plays in the zone entries. That allowed us to come back in the game."

The Senators came out flying in the first period and led 8-1 in shots but the Canadiens settled the game down and got on the board first.

Cousins gave Montreal a 1-0 lead at 13:36, on the power play, by deflecting a hard pass from Domi up and over Nilsson's shoulder.

After a scoreless second, the Canadiens took a 2-0 lead 29 seconds into the third when Tatar's shot ricocheted off defenceman Mark Borowiecki and skipped over Nilsson.

"I didn't think our first period was good even though we had shots," said Ottawa coach D.J. Smith. "I didn't think we had enough emotion. Second and third period, we played with emotion."