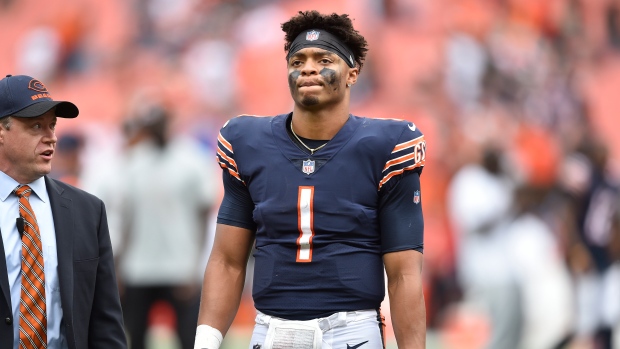 Following Sunday's putrid offensive performance against the Cleveland Browns, Chicago Bears head coach Matt Nagy that all three of the team's quarterbacks - Justin Fields, Andy Dalton, and Nick Foles - are options to start Week 4 against the Detroit Lions, according to ESPN's Adam Schefter.

Bears’ HC Matt Nagy told reporters today that all three QBs - Justin Fields, Nick Foles and Andy Dalton - are under consideration to start in Week 4 against the Lions.

Field's first NFL start did not go well, as he finished with just 68 passing yards and was sacked nine times. The Bears finished the game with just one net passing yard in the 26-6 loss.

Dalton was injured in the Bears' Week 2 victory over the Cincinnati Bengals, resulting in Fields getting the Week 3 start. Through parts of two games, the veteran has completed 36 of 49 passes for 262 yards, one touchdown, and one interception.

Foles started seven games for the Bears last season, posting a 2-5 record while passing for 1,852 yards, 10 touchdowns and eight interceptions.