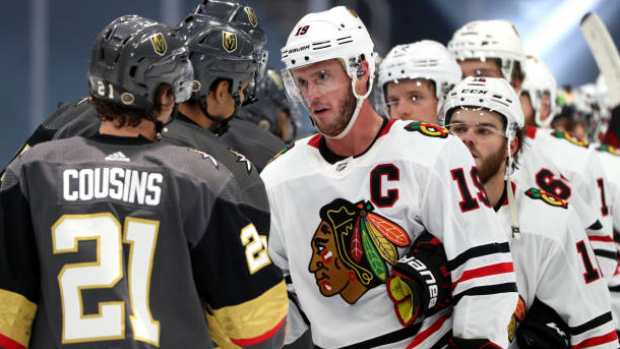 The Chicago Blackhawks wrote a letter to season ticket holders on Tuesday confirming the team was committed to a rebuild after trading winger Brandon Saad and allowing veteran goaltender Corey Crawford to leave in free agency this month.

"We recently said goodbye to a pair of popular, two-time champions and acquired some new players via trade and free agency," the letter read. "We understand it was tough to see those respected veterans go and realize you may have some questions about our direction. We'd like to address that direction and share why we're hopeful for the future of Blackhawks hockey.

"We're committed to developing young players and rebuilding our roster. We want more than another window to win; we want to reach the summit again, and stay there — an effort that will require a stockpile of emerging talent to complement our top players.

"The influx of youth and their progression will provide roster flexibility and depth throughout our lineup. We were already the youngest team in the 2020 playoffs and several Blackhawks experienced that intensity for the first time; this will help to further establish a culture that embraces the grind of improvement driven by competitors who are relentless, engaged and motivated by a team-first mentality to win.

"As our young players develop and learn how to win consistently, they'll make some mistakes. Inevitably, we'll miss the mark sometimes, too, but we'll communicate openly with you on this journey together.

"We know that what comes next must be more than just words, and that inspires us."

A message to Blackhawks fans. pic.twitter.com/7wBXrJPDQ1

The Blackhawks, who defeated the Edmonton Oilers in the qualifying round of this year's playoffs before falling to the Vegas Golden Knights in the first round, have not advanced past the first round of the postseason since winning the Stanley Cup in 2015.

Chicago announced prior to the opening of free agency that Crawford would not return after spending 13 seasons with the team and traded Saad and defenceman Dennis Gilbert to the Colorado Avalanche for Nikita Zadorov and Anton Lindholm one day after the free agent market opened.

Blackhawks captain Jonathan Toews told Mark Lazerus of The Athletic after the Saad trade that he was not pleased with the direction the team was heading.

“Bottom line is, I want to win,” Toews said. “The expectation for the other leaders on this team and myself is to come ready to training camp every year to be a playoff team. We prepare ourselves to win a Cup for our fans. I’ve never been told that we were going through a rebuild. That has never been communicated to me, for that matter. A lot of this comes as a shock because it’s a completely different direction than we expected.”

The Blackhawks won three Stanley Cups from 2010-2015 under head coach Joel Quenneville, who was fired and replaced by Jeremy Colliton 15 games into the 2018-19 season.

Toews, Patrick Kane and Duncan Keith, who all played key roles in those three Stanley Cups, are under contract through 2022-23, while veteran Brent Seabrook is under contract until 2024.