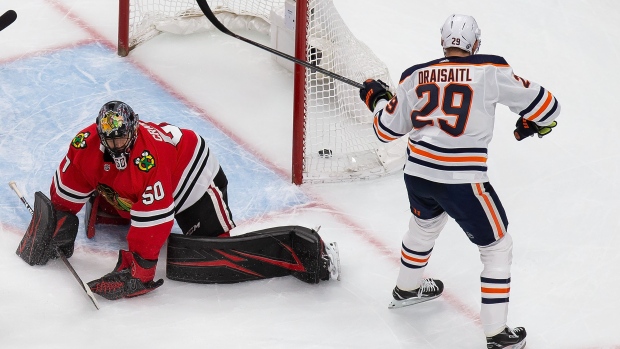 The Chicago Blackhawks and Edmonton Oilers are in the midst of the greatest series in the history of North American sports.

Well, that might be a slight exaggeration. But the Blackhawks and Oilers have, through three games, comfortably put together the most intriguing of the National Hockey League’s eight play-in matchups.

Through three games, the two sides have already scored 26 goals. Even that number feels a little on the low end considering the number of sensational offensive plays and defensive gaffes, plus the sheer amount of power-play time – the Blackhawks and Oilers have combined to play nearly 50 minutes of the series on the man advantage.

We thought this series would be offensively explosive, but it almost feels like these two teams are playing a different sport. Consider the numbers in this series relative to the other seven matchups around the league: 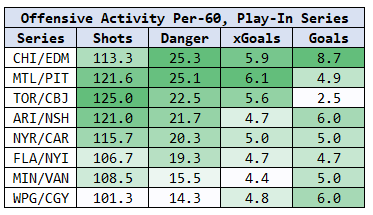 The scoring is out of control, but what’s fascinating is that it has been underpinned by a tremendous amount of opportunity.

A heavy proportion of shots are coming from in tight – nearly one in four shot attempts through the first three games of the Edmonton-Chicago series have come from “high-danger” areas (think inside the circles and the low slot). In the Winnipeg-Calgary series, that number is close to one in eight.

In short: Mikko Koskinen, Mike Smith and Corey Crawford are just facing an endless barrage of difficult shots, and, invariably, some of those shots are going to find the back of the net.

But you cannot blame the defensive play unilaterally for the high scoring in this series. The trio of goaltenders have faced tough shots, yes, but they have also struggled in getting the stop rates we would expect from league-average goaltenders in similar positions.

Smith’s ugly performance in Game 1 forced Dave Tippett to turn the crease over to Koskinen. Although Koskinen has been better in his two starts, that’s only in the relative sense. On the Chicago side, there is no Plan B. Crawford is going to play unless he’s hurt.

If we look at combined goaltending performances by series, we can see the struggles of the goaltenders as well. As a group, we expect them to have the lowest save percentage – there’s simply too much shot volume from dangerous areas to assume otherwise. But look at the delta between expectations and reality, and consider just how low the group save percentages are here:

It’s unlikely that the remaining games in the series (one if Chicago prevails in Game 4, or two if Edmonton can even it up Friday night) will look any different. Even the lower-scoring Game 3, which featured a wild Chicago comeback on a pair of late redirection goals from Matthew Highmore and Toews, was rife with scoring opportunities.

Just look at how many shots came from within five feet of the net mouth for both teams on Wednesday evening:

If you loved the 1980s style of hockey where offensive firepower would melt defences away with relative ease, the remaining games in this series are must-watch television.

Five players – Ryan Nugent-Hopkins, McDavid, Draisaitl, Toews and Dominik Kubalik – have already amassed five or more points in the opening three games, and there is no indication those scoring rates will slow down in any way.

It is a shame this series ever has to end.