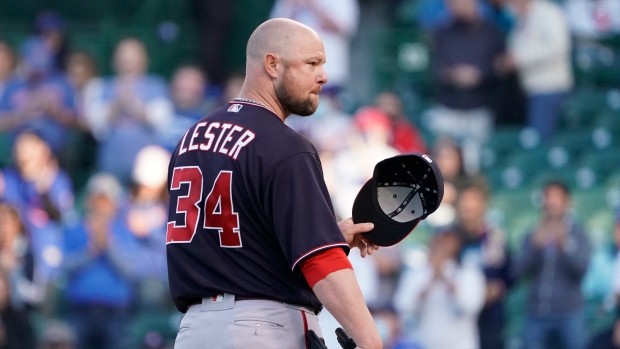 CHICAGO (AP) — Willson Contreras, Jason Heyward and Javier Báez homered off Jon Lester in his return to Chicago, and the Cubs beat the Washington Nationals 7-3 on Monday night.

Lester and Kyle Schwarber, two key members of Chicago’s 2016 World Series championship team, heard loud cheers all night long in their first game at Wrigley Field against their former team. Contreras put his arm around Schwarber’s shoulders before he batted in the first inning, and the catcher gave Lester a brief hug when the pitcher was at the plate in the third.

Schwarber celebrated with a two-run homer into the bleachers in the fourth. Per the custom at Chicago’s iconic ballpark — even for old friends like the affable Schwarber — the ball was thrown back onto the field.

In between the standing ovations and cheering for Lester and Schwarber, the Cubs were mostly all business during their third win in four games.

Cole (5-2) allowed season highs of five runs and seven hits, getting pulled after Garcia led off the sixth with a sharp single on the right-hander’s 89th pitch. Cole struck out seven, but also issued two free passes after walking none over his previous five starts.

Garcia hit his 11th home run and later stole home as part of a double steal.

Jordan Lyles (2-3) struck out six in six innings for his first win in eight starts since winning his season debut April 4. Ian Kennedy worked a perfect ninth for his AL-leading 11th save in 11 chances.

Luke Voit, who led the majors in home runs during the pandemic-shortened season, hit his first of the year after recently coming off the injured list.

With the bases loaded in the seventh, Mets right fielder Kevin Pillar was hit square in the nose by a 95 mph pitch from Jacob Webb, forcing in a run. Pillar was knocked to the ground, and blood poured from his nose when he lifted his head.

After the game, Mets manager Luis Rojas said Pillar was at the hospital getting a CT scan.

New York starter Taijuan Walker allowed one hit in three scoreless innings before leaving with left side tightness. Sean Reid-Foley (1-0) did not allow a hit in three shutout innings.

Edwin Díaz walked Freddie Freeman with one out in the ninth before closing out the game for his sixth save.

Braves left-hander Max Fried (1-2) exited after giving up Nido’s double to open the seventh. McCann broke the scoreless tie with his double off Webb.

Seven players had multiple hits for Chicago, which posted season highs in hits (18) and runs. The White Sox have won nine of their past 11 games, including four straight wins against Minnesota.

J.A. Happ (2-2) was roughed up again by the White Sox. Happ permitted six runs in 3 2/3 innings and has given up 15 runs to Chicago in his past two starts. The Twins have lost seven of eight.