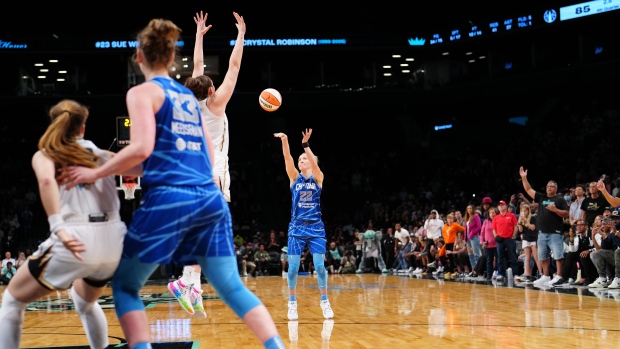 NEW YORK (AP) — After missing five shots in the final 25 seconds, Chicago had one last chance and Courtney Vandersloot responded, giving the Sky the victory.

Vandersloot hit a 3-pointer from the wing with 0.9 seconds left to help the Chicago Sky overcome Sabrina Ionescu’s second career triple-double and beat the New York Liberty 88-86 on Sunday.

Trailing 86-85, Vandersloot took a pass from Candace Parker on the wing after she got the ball from Emma Meesseman and made the 3. New York had one last chance, but couldn’t get a shot off.

“It felt like we were right there and had really good looks,” Vandersloot said of the final seconds. “If you’re going to give us that many opportunities we’re going to capitalize on it. Maybe not the shot we wanted, but a good enough shot to win the game.”

Vandersloot finished with 20 points, 10 assists and six rebounds for the Sky (9-4), who have won five of six.

Ionescu tied the WNBA record for triple doubles when she finished with 27 points, 13 rebounds and 12 assists, accomplishing the feat by the end of the third quarter — the fastest in league history. It wasn’t enough for New York (5-9), which had won four of its past five games.

“I don’t care about triple doubles, we lost, I’m really bummed about that,” Ionescu said. “In retrospect, thankful for my teammates to put me in position to achieve that. ... We have a lot more to prove and I’m excited for the next game.”

There have been 13 triple doubles in WNBA history now, Ionescu’s other one came last season against Minnesota.

Ionescu did all she could to get New York the win. She had 13 of her points in the fourth quarter and joined Candace Parker, Vandersloot and Sheryl Swoopes as the only players to have two triple-doubles in their WNBA careers. Parker had her second one earlier this season.

Ionescu then hit two free throws 14 seconds later to restore a one-point lead for New York, setting up the finish.

“We still need to get better finishing plays with rebounds,” said Liberty center Stefanie Dolson. “Tonight that was our demise in a way, their offensive rebounds on us.”

Meesseman had 20 points and 11 rebounds.

New York led 45-44 at the half as Ionescu had nine points, eight assists and six rebounds. Meesseman scored 10 points for Chicago.

Chicago remained unbeaten in Commissioner Cup games as it sits at 7-0 and is one victory away from clinching a spot in the championship round.

“We just want to be playing in that final game,” Parker said. “We are taking it one game at a time.”

Liberty guard Marine Johannes drove the lane and threw a behind-the-back pass to Dolson, who made a 3-pointer from the top of the key with 32 seconds left in the half.

Sunday’s game also featured a matchup of Chinese basketball players Han Xu and Li Yueru. There was a handful of Chinese media in attendance for the game.

The two played together on the country’s Olympic team in Tokyo. Li averaged 14.8 points, 8.3 rebounds, and shot 78.6% from the field at the Tokyo Games. Han averaged 9.5 points.