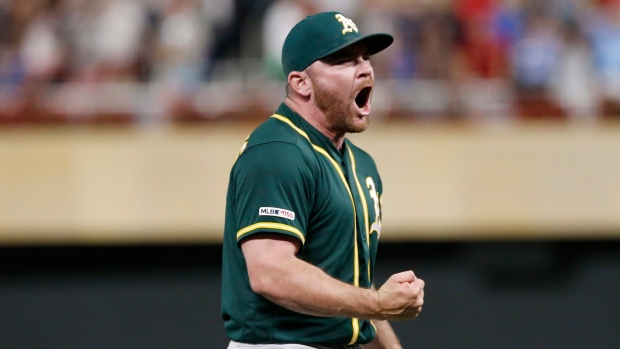 CHICAGO — Liam Hendriks saw the talent the Chicago White Sox had and knew he wanted to join the team. The move became official on Friday.

Chicago finalized a $54 million, three-year deal with the former Oakland Athletics' closer, another big move as the White Sox set their sights on a championship run.

“At the end of the season, my wife and I sat down and made a list of teams,” Hendriks said. “On paper, the White Sox were the team that I wanted to go to.”

General manager Rick Hahn the buyout matching the 2024 salary “helped bridge the gap” between Hendriks' desire for a four guaranteed years and the White Sox's desire for three. Spreading out the buyout helps the team maintain payroll flexibility.

It's a strategy chairman Jerry Reinsdorf has used in negotiating contracts for his other team, the NBA's Chicago Bulls. And he suggested it again over the weekend.

“Jerry's always mentioned that to us as a device that appealed to him in the right situation,” Hahn said.

Now, they have one of the game's best closers to anchor a deep bullpen after more than a year-long pursuit. Hahn said the White Sox had tried to acquire Hendriks in a trade. Instead, they pulled out the checkbook when most teams aren't spending big.

“I've got to give Jerry Reinsdorf a lot of credit, though, in that he's given us the flexibility during these extraordinarily uncertain — and obviously difficult for a lot of people — times to have the economic wherewithal to aggressively pursue premium upgrades to a team that we feel is pretty good," Hahn said. "Not everybody gets to be in that situation.”

Hendriks debuted with Minnesota in 2011 and spent the past five seasons with Oakland.

Oakland won the AL West in making the playoffs for the third straight season. He was on the mound for the final out when the Athletics eliminated the White Sox in Game 3 of their wild-card series. They went on to lose to their division series against Houston, 3-1.

Hendriks gives the White Sox a workhorse at the back of the bullpen who can pitch multiple innings. He replaces free agent Alex Colomé, who had 42 saves over the past two years.

“I'm ready for whatever, whether it be multiple innings, whether it be solo innings,” he said. “Whatever it needs to be, I'm capable of hopefully going out there and giving the team whatever they need. But yeah, I want the ball. I want to pitch everyday.”

The White Sox made the playoffs for the first time since 2008 and ended a string of seven losing seasons. They tied Cleveland for second place in the AL Central behind Minnesota at 35-25.

They've been busy since the final out, trying to push themselves closer to their first World Series championship since 2005.

Chicago acquired Lynn from Texas, adding a durable frontline starter to go with Giolito and Keuchel. The White Sox also signed outfielder Adam Eaton, who helped Washington win the World Series in 2019, for a second stint.

The 23-year-old Céspedes — the half-brother of two-time All-Star outfielder Yoenis Céspedes — is a natural centre fielder who can play each outfield spot and hit to all fields. He defected from the Cuban national team while it was playing in the Can-Am League in June 2019 and spent six or seven months in the Bahamas. He moved to Florida after getting his visa.

He might not need much time to reach the majors.

“You never want to put a timetable on his arrival,” said Marco Paddy, a special assistant to the general manager. “But from a baseball standpoint, he's very close. He's advanced. He knows how to play the game.”