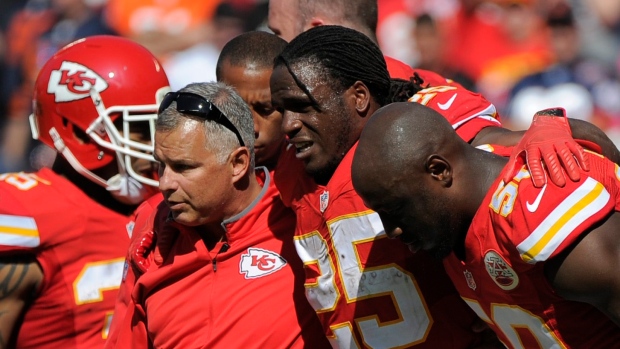 Jamaal Charles helped from the field , The Canadian Press

KANSAS CITY, Mo. - Pro Bowl running back Jamaal Charles could miss the rest of the Kansas City Chiefs' season after sustaining a serious knee injury in the third quarter of Sunday's 18-17 loss to the Bears.

Charles had taken a carry deep in Bears territory when he tried to cut left, his right knee buckling at a gruesome angle. He immediately went to the locker room, and Chiefs coach Andy Reid said after the game the preliminary diagnosis was a torn ACL.

Charles will have an MRI on Monday to confirm the extent of the injury.

Charles tore the ACL in his left knee four years ago in a game in Detroit. Just like Sunday, that injury occurred while he stepped awkwardly without a defender making contact.

"I sat there and I took a knee and said a prayer, just praying for the best," Chiefs wide receiver Jeremy Maclin said. "It's all very unfortunate."

The injury to Charles seemed to deflate the Chiefs, who led 17-3 at that point.

Their drive stalled after he was helped to the sideline, and Kansas City had to try a 26-yard field goal that was blocked by Pernell McPhee. The Bears suddenly seized momentum, getting a field goal later in the third quarter to jumpstart their comeback.

"It hurts. We felt like we played way better than what the loss shows," said Chiefs kicker Cairo Santos, whose 66-yard field-goal attempt as time expired was well short.

Reid said the Chiefs were fairly certain that Charles, who had carried 12 times for 58 yards, had torn ligaments in his knee when he was helped off the field.

"People saw what was going on. They had a pretty good idea," Reid said. "I think it was more of a non-contact type of thing. But again, those types of things, you can't come back and have the blocked field goal and have the momentum swing."

Charles had been off to a relatively slow start this season, getting just 11 carries each of the past two weeks. He also had two fumbles in a loss to Denver, including one returned by the Broncos in the final minute for the decisive touchdown in a 31-24 victory.

But the Chiefs also have no bigger playmaker than Charles, who's run for at least 1,000 yards each of the past three seasons. He had 12 touchdowns rushing a couple of years ago, nine last season, and had already reached the end zone four times this season.

Without him in the lineup, the Chiefs will be forced to lean on third-year player Knile Davis and Charcandrick West, a former undrafted free agent out of Abilene Christian.