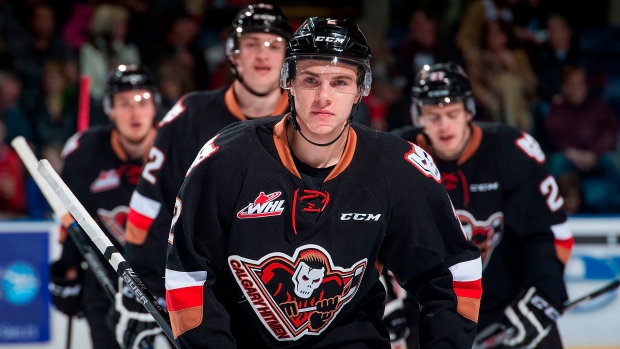 The Calgary Hitmen are the most valuable franchise in Canadian major junior hockey, according to a study recently filed in an Ontario court as part of a lawsuit against the Canadian Hockey League.

According to a report on franchise economics filed in Ontario Superior Court in Toronto on June 14, the Hitmen are worth $68.95 million, tops among the 42 teams in the Ontario Hockey League and Western Hockey League.

The study — prepared by Kevin Mongeon, an assistant professor of sport management at Brock University — was commissioned by the lawyers for former junior players who say that CHL franchises are raking in millions of dollars from ticket revenue, corporate sponsorships and TV rights fees, and are worth tens of millions of dollars.

The former players have filed a lawsuit alleging major junior teams should be sharing more of their profits with players. The CHL, the umbrella organization that represents the OHL, WHL and Quebec Major Junior Hockey League, has argued that it is a development league featuring amateur student athletes. It has also argued that if it’s required to pay damages to the players, some teams may go out of business.

Mongeon wrote in his study that the Ottawa 67’s are the OHL’s most valuable team, worth $55.53 million. He said other valuable teams from the two leagues include the Edmonton Oil Kings ($51.06 million), the Mississauga Steelheads ($44.85 million) and the London Knights ($23.02 million).

Mongeon’s study does not include teams from the QMJHL. Ted Charney, a lawyer representing former junior players who are suing the CHL, hired Mongeon to conduct the study. Another law firm in Quebec is handling the case against the QMJHL and may conduct its own study of franchise values there.

Mongeon wrote that his study was not scientific, and that he relied on assumptions based on the confirmed sale prices of 11 CHL franchises since 1990. The professor created a rate of return model that accounted for a team’s market size.

“Complete and sufficiently publicly available revenue and cost data are rarely available to analyze and estimate franchise values,” Mongeon wrote. “Accounting regulations do not always attribute revenues and costs and can also make valuation estimates based on balance sheets difficult. Many team owners have a background in investment and business ownership suggesting CHL ownership is an investment vehicle.”

Mongeon did not respond to email and phone messages seeking comment.

His study is sure to draw scrutiny after he valued the Knights, a franchise that has repeatedly led the OHL in attendance in recent years and has a virtual monopoly in its market, for so much less than franchises in Ottawa and Mississauga, Ont., where major junior teams compete against NHL clubs for attention and sponsorship dollars.

Former NHL players Mark and Dale Hunter bought the Knights in 2000 for $3.8 million, The Globe and Mail reported in 2009. Shortly after the Hunters bought the team, the Knights moved in to the $42-million John Labatt Centre, which has 9,000 seats and at least 38 luxury boxes.

London led the OHL in attendance in 2015-16, with an average per-game attendance of 9,013. (The Quebec Remparts of the QMJHL led the CHL in attendance, averaging 13,835 spectators per game.)

CHL president and OHL commissioner David Branch wrote in an email to TSN that Mongeon’s study was based on assumptions and was “contrary to and does not account for the evidence that has been filed [in court] by the teams.”

Mongeon estimated that WHL and OHL teams generate between $2 million and $10 million in ticket revenue in a season, not including revenue from sponsorships, merchandise sales and broadcast revenue.

“The revenue estimates that I provide show that sufficient resources exist to pay players,” Mongeon wrote. “These findings raise questions about the statement that one third of teams would be unable to afford minimum wage… Economists have long argued that owners have strategic reasons to plead poor. Claiming losses most notably enhances an owner’s position in bargaining for new stadiums with current host cities or for leveraging new investments from other actors.”

To be sure, some of the estimates used in Mongeon’s study are widely off.

The Rangers are controlled by a group of about 4,500 community-based owners and the team’s annual report, which is distributed to those owners, shows the Rangers make far more money than Mongeon’s estimate.

The Rangers generated regular-season ticket revenue of $3.4 million for the year ended May 31, 2015, according to a copy of the team’s 2015 annual report obtained by TSN.

The Rangers made an additional $2.4 million in sponsorships.

The team’s regular-season operations surplus was $273,789. (The Rangers also made $334,221 from playoff ticket revenue, according to their annual report.

Documents also filed in court include allegations about the financial health of the Niagara IceDogs, a franchise that’s worth an estimated $8.3 million, according to Mongeon.

The IceDogs generate about $2.7 million in revenue, Burke testified. She also testified the IceDogs’ expenses were $2.7 million to $2.9 million each season.

“We, of course, hope to one day make enough of a profit so that we do not bankrupt ourselves, but we never have and never will expect to become wealthy from the IceDogs,” Burke wrote. “We provide everything we possibly can for the players and treat them as our own adopted children.”

“The Burke affidavit presents a very negative picture of the club’s finances, but does not discuss the fact that the IceDogs were the number one team for attendance in the entire OHL based on arena capacity percentage, for the 2008-09 to 2013-14 seasons,” Berg wrote. “In fact, the IceDogs were over capacity in terms of attendance for every game for those six seasons. This means that, for every single IceDogs home game, there was standing room only.”