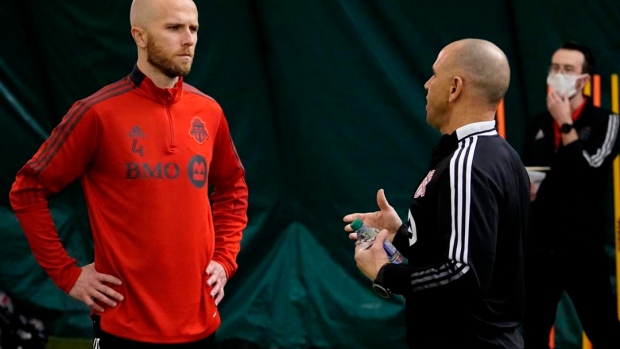 Armas likes what he sees in Toronto FC camp but there are still issues to resolve Article Image 0 , The Canadian Press

Toronto FC can count on roster continuity and an extended training camp in the buildup to the 2021 MLS season.

While Monday marked the first day most other teams were able to have their coaches and technical staff on field with players, Toronto has been in camp for close to two weeks — granted extra time to prepare for the Canadian Championship final later this month.

New head coach Chris Armas likes what he sees in terms of commitment to his style of play, which promises to be more aggressive and pressing.

"It's been a great nine, maybe 10 training sessions over the course of two weeks," Armas said Monday in just his third meeting with media since his Jan. 13 appointment. "It's a heck of a group to work with."

Should it get past CPL title-holder Forge FC in the Canadian Championship final, whose date and venue has yet to be announced, TFC will play Mexico's Club Leon on April 7 and 14 in a two-legged Scotiabank CONCACAF Champions League round-of-16 series.

The MLS regular season kicks off April 17, with TFC expected to take up residency in the U.S. again due to the pandemic-related border issues that forced it to finish out the 2020 season in East Hartford.

Florida is the front-runner, with Orlando and Tampa possible homes away from home.

Toronto fans will see a familiar group in action wherever the team plays.

The league's 2021 transactions list has just one new face on the TFC docket: 20-year-old Jordan Perruzza, a homegrown forward whose 2021 first-team contract was announced last August.

Forward Ayo Akinola, who missed a January camp with Canada, is still sidelined with the club yet to detail his condition.

“Ayo has a medical condition that we hope to resolve soon," the team said in a statement when asked for specifics. "At this time he has not been given medical clearance by team doctors and will be re-evaluated in mid-March."

The 21-year-old had a breakout season last year with nine goals in 15 games.

Fellow forward Ifunanyachi Achara, whose promising start as a rookie was derailed by surgery to repair his anterior cruciate ligament last July, is still rehabbing.

Midfielder Nick DeLeon and Brazilian fullback Auro are finishing off quarantine. Winger Tsubasa Endoh "also needs to get healthy," according to Armas.

Armas has provided a few more clues to his approach, suggesting captain Michael Bradley will see action further forward and be around the ball more. The 33-year-old Bradley has played as a defensive midfielder in recent years, shielding the backline.

The coach says his team will also have flexibility on offence, able to use star striker Jozy Altidore in his traditional role as tip of the TFC spear or play with two strikers.

"We're trying to create more clarity for him and utilize his weapons — his ability to run and challenge backlines," he said of Gallardo, who failed to find his niche under former coach Greg Vanney. "We see something there. And Jacob Shaffelburg the same."

Altidore has been "working his ass off" for the team in training, according to Armas.

Altidore's future became a topic of conversation again after U.S. coach Gregg Berhalter's comments in late January about transfer interest in the 31-year-old. Armas indicated Monday that he wants to put that issue to bed, saying the likes of Altdore have helped fill the club's trophy case.

"I'm seeing a winner every day show up and commit big-time to the team and himself," Armas said.

"We think there's some interesting things there but we need a little more time to assess what's going to be the most reliable cover," said Armas.

With CONCACAF Olympic and World Cup qualifying play both starting later this month, Armas is also in negotiations with Canada Soccer coaches.

The first domino to fall is the Canadian Championship, he suggested, with everything from date and venue to roster size as factors to be considered. Anther key question is how long players who are released for international duty will be sidelined due to quarantine upon their return.

Injuries will also play a part.

"I don't have clarity at the moment. I will in another week or so," he added.

This report by The Canadian Press was first published March 1, 2021