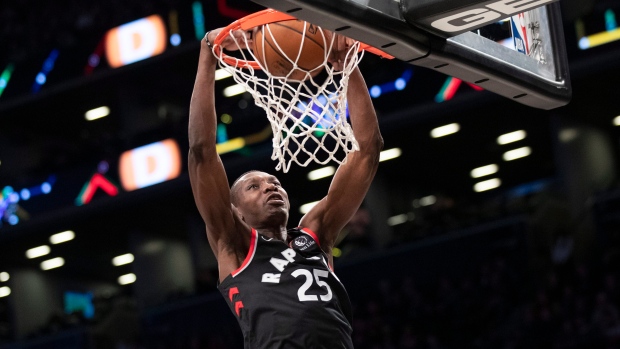 TORONTO — Chris Boucher is about to make his return to the Raptors lineup, and his timing couldn't be better.

The 28-year-old from Montreal sat out the entire pre-season after dislocating his left middle finger in practice. Boucher said after morning shootaround that he'd been cleared to return for Wednesday night's season opener against the visiting Washington Wizards.

"I'm really excited to pursue what I've been doing and to just keep on helping this team to get to where we want to be."

The Raptors were forced to make Tampa, Fla., their home last season because of protocols and border restrictions around COVID-19.

Boucher averaged 13.6 points, 6.7 rebounds, and 1.9 blocks per game last season. He signed a two-year deal worth US$13.5 million contract a year ago and will be an unrestricted free agent following the 2021-22 season.

Boucher said he suffered the injury playing five-on-five in training camp. He had surgery to realign the bones.

"I was putting my hand up and Precious (Achiuwa) came full speed and my finger just got jammed into his body," Boucher said. "It doesn't really hurt when I get the ball and when I'm dribbling and it doesn't really affect my shooting. So Alex (McKechnie, the team's vice-president of health and performance), he looked at it and said I was good depending on how the pain was and there's no pain so I guess we're ready for the game."