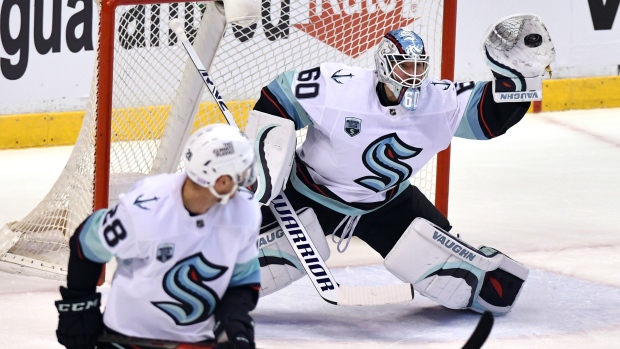 The Seattle Kraken will be without the services of goaltender Chris Driedger for the next seven to nine months, the team announced on Tuesday.

The 28-year-old Winnipeg native incurred a torn ACL during the third period of Canada's 4-3 overtime loss to Finland in the gold-medal game of last month's IIHF World Championship.

#SeaKraken goaltender Chris Driedger suffered a torn right ACL during the third period of Team Canada’s Gold Medal match vs. Finland at the #IIHFWorlds on May 29.

He had successful knee surgery on June 6 and is expected to have a 7-9 month recovery → https://t.co/krPqrRpsC8 pic.twitter.com/WAwcZfThTO

The Kraken say that Driedger underwent surgery for the injury on Monday.

Driedger, who signed a three-year, $10.5 million deal with the team last summer, was limited to 27 games during the team's inaugural season. He posted a 9-14-1 mark with a goals against average of 2.96 and an .899 save percentage.

Originally taken in the third round of the 2012 NHL Entry Draft, Driedger has appeared in 65 NHL games over six seasons with the Ottawa Senators, Florida Panthers and Kraken.