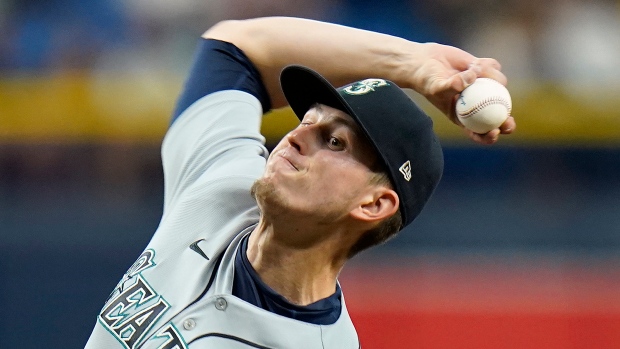 Fraley, who was activated before the game after being on the COVID-19 injured list since July 18, also made a diving catch in left field on Brandon Lowe’s liner in the third. He went 2 for 4 with a walk and stole a base.

“A great ballgame overall,” Seattle manager Scott Servais said. “We put the starting pitching together with a lot of really good at-bats. Big offensive right for us. Flex was great.”

Flexen (10-5) gave up two runs and seven hits, helping the Mariners move within three games of Oakland, which currently holds the second AL wild card. The right-hander struck out six and walked two.

Seattle’s Ty France had three hits with three RBIs, and came within a triple of hitting for the cycle.

Randy Arozarena homered as Tampa Bay saw its divisional lead over Boston drop to one game. The Rays moved into first place during a four-game winning streak that included a 14-0 thrashing of the Yankees and a three-game sweep of the Red Sox.

“We were just flat tonight,” Tampa Bay center fielder Kevin Kiermaier said. “We just didn't get a lot going. It's one game, so no one's worried about it or anything We just had a great weekend. These things happen. They were the much better team and it showed.”

Flexen, who pitched last year in the Korean Baseball Organization after spending parts of the previous eight seasons as a New York Mets minor leaguer, kept a Rays lineup that scored 33 runs in its previous four games in check.

“I really had a good curveball,” Flexen said. “I think my curveball was my X factor tonight.”

Seattle is 5-0 against Tampa Bay this season, and is only team in 2021 that the Rays have played and haven't beaten at least once.

Kyle Seager and France had RBI singles before Fraley drove in two with his base hit off Michael Wacha (2-3). The fifth run scored on second baseman Lowe’s throwing error.

France had a fourth-inning RBI double and a solo homer during a two-run seventh that put Seattle ahead 8-2.

The Mariners were coming off consecutive walk-off losses at Texas.

“You're going to have some highs and lows,” France said. “Yesterday we hit some balls hard right at people and today they dropped. It's just how it goes.”

After Arozarena connected on a solo shot in the fourth, Kiermaier tripled and scored on Lowe’s fifth-inning grounder that cut the Rays' deficit to 6-2.

“It was just not his night, and certainly not our night,” Tampa Bay manager Kevin Cash said.

Mariners: INF/OF Shed Long Jr. (right shin stress reaction) was placed on the 10-day injured list. He has had issues with the shin for nearly a year.

Rays: RHP Chris Archer (right forearm tightness) is undergoing treatment and will have his status updated in the next couple days. He left his start at Triple-A Durham Sunday after one inning with left hip soreness.

Seattle claimed OF Marcus Wilson off waivers from Boston and optioned him to Triple-A Tacoma. OF Dillon Thomas was designated for assignment.

Mariners LHP Yusei Kikuchi (6-6) and Tampa Bay RHP Luis Patiño (2-2) are Tuesday night’s starters. Patiño, 21, is coming off a victory over the Yankees Thursday in which he went six scoreless innings.