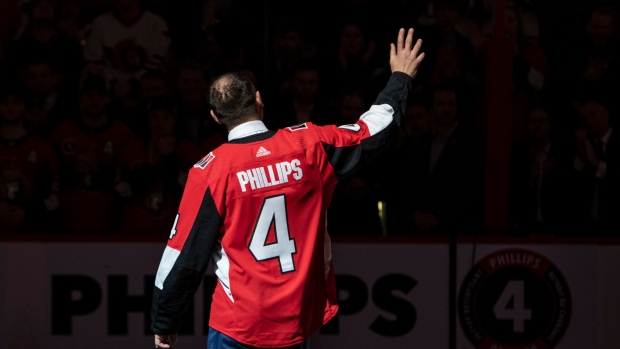 These four words spoken by the late Ottawa Senators general manager Bryan Murray played during the video tribute to defenceman Chris Phillips as the Senators organization retired his No. 4 jersey Tuesday night against the Buffalo Sabres.

In a dimly lit Canadian Tire Centre – where some of Phillips’ most memorable moments as a Senator were played in a video montage on the big screen ­– his former teammate Wade Redden took centre ice to reminisce on Phillips’ career in front of friends, family and Sens fans. Though his career was full of accolades, his road to the NHL was one less taken.

Before being the first overall selection in the 1996 NHL Entry Draft, Phillips played his junior hockey in Fort McMurray, Alta., where he was forced to grow up fast. His late father, Garth, became legally blind due to complications from diabetes and a virus left his mother, Carol, confined to a wheelchair.

Due to these unforeseen circumstances, Phillips decided to delay his WHL career a year as he felt his family was his first priority.

A year later, he joined the Prince Albert Raiders where he split time with the Lethbridge Hurricanes before hearing his name called and forever tied to the Senators with the first pick in 1996.

Phillips’ impact on the city of Ottawa and the Senators organization was not an immediate one. He spent his first season in the WHL, not with the Senators, as he returned to the Hurricanes where he had four goals and 18 assists, helping the team reach the Memorial Cup, losing to the QMJHL’s Hull Olympiques in the final.

When he did take the ice for his first season with the Sens, Phillips was in and out of the lineup, even playing some games at forward. He finished his first season in 1997-98 with 16 points in 72 games. He would go on to miss the majority of the 1998-99 season after suffering a ankle injury against the Sabres before playing an incredible 1,179 games over the span of 17 NHL seasons – all of which were played with the team that drafted him.

Among the accolades on Tuesday, several former teammates congratulated Phillips during the ceremony, with each of them recalling their fondest moments, such as the team’s first Presidents’ Cup in 2003, their first Stanley Cup appearance in 2007, Phillips’ two-goal performance during his 1,000th NHL game and his Game 6 game-winning goal against the New Jersey Devils. But the one constant was how much Phillips gave back to the Ottawa community.

During his time in Ottawa, he volunteered with multiple organizations and was also a co-owner of his own self-titled ‘Big Rig’ microbrewery located in Canada’s capital.

When the time came for his number to finally be raised to the rafters, the 41-year-old Phillips said the event was “incredible.”

With his name now forever a fixture in the building he played so many nights in and next to esteemed Sens’ company in legendary captain Daniel Alfredsson and Frank Finnigan, seeing it all unfold in front of him touched a nerve.

“When I look at, I don’t know what the number is but how many guys in the league even have their number retired. To be in that small company, I’m really at a loss for words. It’s a really special feeling,” he said.