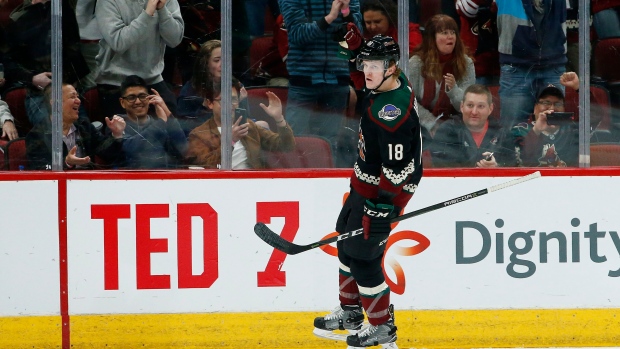 MONTREAL — The price tag to keep Jesperi Kotkaniemi would have been costly to the Montreal Canadiens in more ways than one.

And the availability of young centre Christian Dvorak helped soften the blow of the loss.

Habs general manager Marc Bergevin said Monday that Montreal didn't match the Carolina Hurricanes' US$6.1-million offer sheet for Kotkaniemi, a 21-year-old restricted free agent, because it would have affected Montreal's financial flexibility around other promising young players over the next couple of years.

"The amount of money on a one-year deal for a player who should be making a lot less, it could affect our future," Bergevin said. "We have a structure, our salary cap that we need to work with. And we have some young players coming through that we want to keep.

"So, (Kotkaniemi) put us in a situation where we had to make a decision that was best for our team now and moving forward, and being able to acquire Christian Dvorak made our decision easier."

Montreal received first- and third-round picks in the 2022 NHL draft from the Hurricanes. And in the hour following Kotkaniemi's departure on Saturday, the Canadiens announced Dvorak's arrival to help replace their young centre.

Montreal acquired the 25-year-old American from the Arizona Coyotes in exchange for a conditional 2022 first-round pick and a 2024 second-round pick.

Dvorak -- who has 67 goals and 79 assists in 302 regular-season games over five NHL seasons -- said he was keen to experience Montreal's hockey-crazed culture.

"That's definitely something I'm very excited about," Dvorak said in a virtual media availability. "They love their hockey there in Montreal. We all know that. Fans love the team a bunch. So definitely very excited to see that up there and hopefully help them win some hockey games."

Dvorak said he was excited to join a team that wants to win now, and noted the Habs' thrilling playoff run this past season that saw them lose to Tampa Bay in the Stanley Cup Finals.

"They're a very hard team to play against and they just have no quit in them, they were down (3-1 in the opening round) against Toronto and came back and won, and kind of carried the momentum of the rest of the way, so that's a team that you want to play for," he said.

Dvorak had heard rumblings for the past few weeks that the Habs were interested.

"Once that offer sheet situation came about, I figured it might be more of a possibility," he said.

Dvorak had recently closed on a new house in Arizona, but shrugged off the upheaval as "part of the business."

Bergevin said there's a lot to like about Dvorak, who had 17 goals and 14 assists in 56 games last season.

"He's a responsible two-way centre, he is not going to be the player that is gonna wow you, but his detail to the game is very good. He plays a honest game," the GM said.

It was the first successful offer sheet in the NHL since Dustin Penner moved from the Anaheim Ducks to the Edmonton Oilers in 2007.

"(Kotkaniemi) could only answer that from his point of view," the GM said. "We give the same tools to every player in our organization to reach their full potential. Some do, some don't, some take longer than others. And the best way to be able to reach that point, I think, is assessing his own game. And sometimes players -- not all of them, but some -- they don't quite assess their game the right way, or the way they're really playing."

This report by The Canadian Press was first published Sept. 6, 2021.