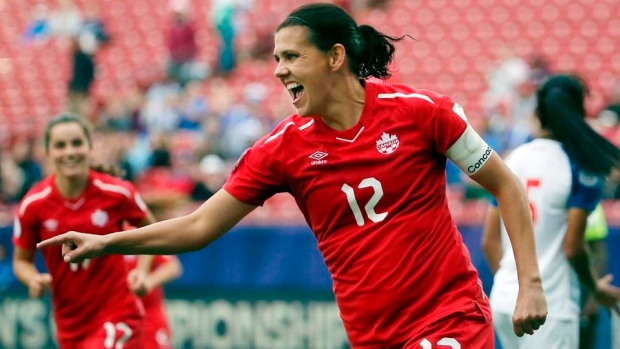 While Christine Sinclair edges closer to the all-time international goals record, her team will be chasing a title.

Fifth-ranked Canada embarks on its Women's World Cup quest in France with its captain sitting at 181 career goals — four away from breaking former U.S. star Abby Wambach's global record (among men and women) of 184.

Sinclair has spent 19 years with the national team, time during which Canada has seen its profile rise dramatically on the international stage. Known for being soft-spoken and humble, she'd rather keep the focus on the team.

"My time on the national team has been a roller coaster, a journey, ups and downs. And I can honestly say I've been waiting my entire career for this team, in that we're so talented and have the depth to be able to compete at World Cups and Olympics. That excites me," she said. "We're just so much more talented than we've ever been."

Now 35, it will be Sinclair's fifth, and likely last, World Cup.

"It's unbelievable what she's done. I mean it's a privilege to play with her. I think anyone who has played with Sinc knows what kind of leader she is, how humble she is given what she's done. She's literally the best forward that's ever played the game," teammate Diana Matheson said. "Her attitude and what kind of teammate she has been is just second to none for every time, every team she plays for."

The Canadians were dealt a blow when Matheson was recently ruled out of the World Cup because of a toe injury. A national team regular since her debut in 2003, Matheson collected her 200th cap with the team during the CONCACAF qualifying tournament in Texas last fall.

Also sitting out the World Cup is veteran goalkeeper Erin McLeod, who has plantar fasciitis. She had appeared in the previous four World Cups for Canada.

Matheson, who plays for the Utah Royals in the National Women's Soccer League, issued a statement expressing her disappointment.

"Unfortunately, despite great support from Canada Soccer and Utah Royals FC, I am unable to play through this injury and will be undergoing surgery as soon as possible to start the recovery process," she said. "I look forward to cheering on our team from home along with the rest of Canada."

The Canadians have won two straight bronze medals at the Olympics, but they've never been on the podium at soccer's most prestigious tournament. Their best result was a fourth-place finish in 2003.

It was disappointing four years ago when Canada hosted the World Cup and lost to England in the quarterfinals. The United States beat Japan in the final in Vancouver for the title.

Since then, there has been some change at the top. John Herdman, who coached the increasingly successful team for eight seasons, has taken over the Canadian men's national team. He was replaced last year by Kenneth Heiner-Moller, the former coach of the Danish women's team who was an assistant on Herdman's staff at the 2015 World Cup.

Without McLeod, Canada will turn to Stephanie Labbé, who also plays for the North Carolina Courage. Adriana Leon, a 26-year-old forward who plays for West Ham United, had a pair of goals during qualifying, as did forward Janine Beckie, who plays for Manchester City. Midfielder Sophie Schmidt, 30, is expected to play in her fourth World Cup.

Canada, in Group E in France, will open the tournament with Cameroon on June 10 in Montpellier before travelling to Grenoble to play New Zealand. The Canadians wrap up the group on June 20 in Reims against the Netherlands.

Sinclair hopes Canada creates a legacy to build on long after she's gone.

"We've got an amazing group of veterans that all do their fair share leading this group. We all have our different strengths and weaknesses in helping younger players," Sinclair said after a recent exhibition. "Just the connection we have — whether you've been on the team for a few years like myself or this is your first year — I hope we provide a safe and welcoming environment where everyone has a voice and feels important. That's what we pride ourselves on."