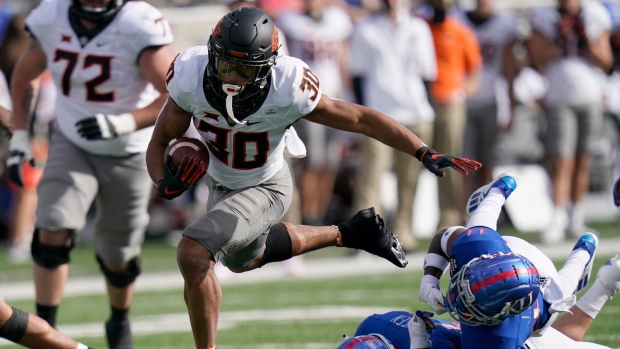 LAWRENCE, Kan. -- Oklahoma State coach Mike Gundy finally got to see what his offense was capable of doing Saturday.

It looked a lot like it has the past decade or so.

After a couple ho-hum performances against Tulsa and West Virginia, the No. 17 Cowboys took advantage of a porous and backpedaling Kansas defense to get back on track. Shane Illingworth threw for 265 yards and three touchdowns, Chuba Hubbard ran for 145 yards and two more scores, and the Cowboys were so far ahead by the third quarter that they were able to rest most of their starters the final 20 minutes of their 47-7 romp at Memorial Stadium.

Tylan Wallace had nine catches for 148 yards and two touchdowns, and Braylon Johnson had four catches for 74 yards and the other passing TD, as the Cowboys (3-0, 2-0 Big 12) built a 31-0 lead by halftime and coasted from there.

"Moving the quarterback around and changing linemen around, we couldn't get in sync," Gundy said. "Today we looked more like who we've been the last 13 or 14 years on offense."

Oklahoma State finished with 298 yards through the air and 295 on the ground for 593 yards of total offense. But as gaudy as those numbers might be, the Cowboys' defense may have been even more impressive.

The Jayhawks' Jalon Daniels and Miles Kendrick were a combined 14 of 24 for 92 yards and a pick. Their running game generated just 101 yards. They were dominated in time of possession, number of first downs (31 to 12) and they didn't have a play go for more than 10 yards until early in the fourth quarter.

" didn't feel like we were overwhelmed. I felt like should we continue to go the course we're going, we'll be fine," Kansas coach Les Miles said. "I like our team and I think we'll work together and do the things that this school has done before. They are resilient. They want to win. They're competitive. And I'm going to believe in them and that's my choice."

Early on, the Jayhawks (0-3, 0-2) actually gave the roughly 10,000 fans allowed into Memorial Stadium for the first time this season a reason to cheer, making an impressive a goal-line stand that forced Oklahoma State to kick a field goal.

By halftime, though, many of those same fans had left.

The Jayhawks, who went three-and-out on their first three possessions, simply collapsed on defense. They couldn't stop the Cowboys on a short field and watched Hubbard crash in from a yard out for his first touchdown. Then, after Kansas punted again, Illingworth found Johnson streaking downfield for a 66-yard scoring strike.

Kendrick replaced Daniels and fared no better under center, and the Jayhawks were forced to punt for the fifth straight possession. Illingworth needed only six more plays to hit Wallace with a 55-yard touchdown pass.

"We threw the ball well, all the receivers did a great job. Just a great job from the offense all around," Hubbard said.

Hubbard's second TD gave the Cowboys a 31-0 lead just before halftime. And on a day in which the Jayhawks celebrated the late Gale Sayers during a halftime ceremony, Hubbard did his best impersonation of the "Kansas Comet." He stopped on a dime, reversed field, cut back in the secondary and then bowled into the end zone for the score.

Wallace added a second TD catch of his own to open the second half. And when the Jayhawks failed to convert on fourth-and-1 on their ensuing possession -- which perfectly encapsulated their offensively inept afternoon -- the Cowboys merely had to coast to the finish for their 11th consecutive win in the series.

"We're in pain," Miles said, "but in my opinion we're going to continue to work. This is going to be a good football team."

Kansas unveiled statues of Sayers, who died last week at 77, and fellow All-American John Hadl at halftime in front of the nearby Anderson Family Football Complex. Sayers also had his No. 48 emblazoned on the field at the 25-yard line.

Oklahoma State was hardly impressive offensively in its 16-7 win over Tulsa to open the season and a 27-13 win over West Virginia last weekend. But with quarterback Spencer Sanders still out with an injury, Illingworth looked much better in his second straight start and the rest of the offense followed.

Kansas has not allowed fewer than 38 points in any of its first three games, which is a considerable problem when the Jayhawks have yet to score more than 23, either. Things don't get easier with back-to-back road games ahead.

Both teams are off next week. Oklahoma State heads to Baylor on Oct. 17, the same day Kansas visits West Virginia.