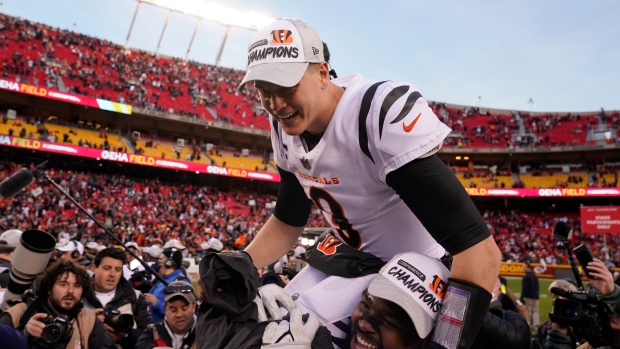 Bungles no more, Cincinnati is headed to the Super Bowl.

Matching the biggest comeback in an AFC championship game, the Bengals rallied from an 18-point hole to stun Kansas City 27-24 in overtime Sunday for their first trip to the big game since the 1988 season. The team that won only two games two years ago, earning them the top overall draft pick that they used on quarterback Joe Burrow, pretty much dominated the Chiefs after the first quarter.

Rookie Evan McPherson made a 31-yard field goal to win it.

Cincinnati, winner of the AFC North, hadn’t won a postseason game since 1991 before beating Las Vegas, then earned a road victory in the playoffs for the first time in franchise history when it eliminated top-seeded Tennessee. The AFC West champion Chiefs routed Pittsburgh and then won a classic in overtime against Buffalo to get to their fourth consecutive conference title game.

On Sunday, Burrow led them back and McPherson, making like a 10-year veteran, kicked four field goals in the game, including the winner after Vonn Bell's interception of Patrick Mahomes on the opening series of overtime got Cincinnati the ball.

“We’ve been a second-half team all year," said Burrow, who missed six games in 2020 with a knee injury. "You don’t really want to be that way, but that’s kind of how it’s worked out. Our defense really stepped up in the second half and on offense we made plays when we had to. ... It was just a great overall team effort.”

The other 18-point rally in the AFC championship game came in the 2006 season when Indianapolis beat New England 36-34. Burrow can take note that the quarterbacks in that contest were Peyton Manning and Tom Brady.

“We’ve overcome a lot of deficits this year," coach Zac Taylor said. "We always believe in all three of our phases. Everyone stepped up. We’re not done yet.”