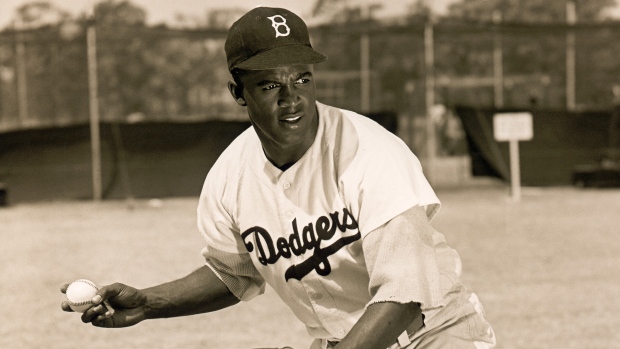 He faced opposition, turmoil and hatred during his 10-year career, but persevered through it all, winning National League Rookie of the Year honours in his first season, NL MVP in 1949, a World Series in 1955 and induction into the Baseball Hall of Fame in 1962.

MLB celebrates Jackie Robinson Day every April 15 by having every player in the league wear his universally retired No. 42. For this year's special 75th anniversary, every 42 across the Majors will be colored Dodger Blue.

To commemorate this historic day, TSN’s Rod Smith spoke to former Blue Jays manager Cito Gaston about Jackie Robinson’s legacy and how it inspired his own career as a player and two-time World Series-winning manager.

This interview has been edited for length and clarity.

It means everything to me, and it should mean everything to a lot of people because without Jackie, without Mr. Robinson, we certainly would not have the opportunity to play professional baseball. I wouldn’t have the chance to manage a baseball team, no less a big-league baseball team. We owe him a lot and I certainly think about him on more than this day, but any time something comes up that I think he might have went through to get us to this point, my heart goes out for him because I know he went through a lot to get us to this point. Sometimes in the minor leagues I went through a lot, but not quite as much as he has.

What do you think his lasting legacy is – and not just talking about baseball, but beyond baseball as well?

I think one thing was how he carried himself. It was very hard for him to probably do some of the things, ‘not said’ things or even get into a fight on the field, because he was certainly mistreated out there quite a bit. And I’m sure he got a lot of balls and strikes that weren’t balls and strikes too. But I just think the way he conducted himself in life – on the field and off the field – he just was a great man. If you really think about him, he was actually (around) before Martin Luther King for racial equality. He was out in front all those years, leading and getting minorities jobs. Because I think without him being the first Black man in Major League Baseball, it would have taken us a lot longer to get there.

I’m wondering if you can elaborate on that. You were three years old when he made his debut. As you grew up and got into the game of baseball, you certainly knew about him and everything he was going through. Now, you’ve talked about the times that you went through it as well – some terrible incidents of racism. How much did it help you endure, knowing what he went through?

It helped me quite a bit because I knew that he went through tougher things than I was going through. And of course, my (Atlanta Braves) roommate – I roomed with Hank (Aaron) a couple of times and seen the things that he was going through, especially getting close to Babe Ruth’s home run record. I’ve seen what those guys went through, and it just helped me stay focused and hopefully handle things the way Mr. Robinson did – do things by action and not by words. And that was one of his greatest qualities – he just kept his head down and went forward. Without him, none of us would be here.

Thirty years ago in 1992, the Blue Jays won the World Series for the first time and you became the first Black manager ever to win a World Series. When you reflect upon that, what do you think about?

Well, I think it’s pretty amazing. As a kid growing up, I always wanted to play professional baseball. And that’s what I tell kids all the time – you can do anything you want to do, if you want to do it badly enough and are willing to listen and learn and work hard at it, it will happen for you. But as far as being a manager - I never had the wildest dreams in my life that I was going to become a manager. On the way, a lot of people helped me too, but I would never be on that way if it wasn’t for Jackie Robinson and what he did and went through for all of us. That’s including Latin guys, Hispanic guys, and Black guys too. He went through a lot, and I just appreciate all that he did for the game of baseball and just Black people in general.

Certainly, a lot has changed in the 75 years since April 15, 1947, when Jackie Robinson made his debut for the Brooklyn Dodgers. But looking ahead Cito, what social change would you like to see in the baseball world going forward?

We talk about the same thing all the time – I’d like to see more Black managers. I think it is possible to have more Black managers in there and there’s a few Latin guys. But you know, in every sport – even football, even basketball – sports like those are dominated with Black kids, but baseball could step up and do that, and I’d like to see some Black kids playing a little bit more and participating in baseball. I know they all think they’re going to be basketball players or quarterbacks, but that’s not going to happen. I’m pretty sure there’s some good-looking baseball players out there, potential players, kids out there that could really become good baseball players. I’d like to see that happen, see more of those kids get into the game. It’s a fun game, a very rewarding game and you get to meet a lot of people, become friends with a lot of them. I think it’s a great game to play and I’m so fortunate that I had an opportunity to play in Major League Baseball and then be fortunate to have a chance to be a manager in Major League Baseball. So, my life’s been good, and I have to thank Mr. Jackie Robinson for that.