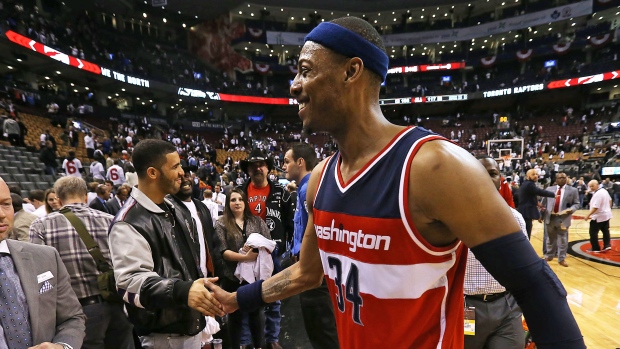 TORONTO - Drake's handshake with the Toronto Raptors' arch-rival has one city councillor angry.

Norm Kelly called out the rapper and Raptors' global embassador for a photo of Drake shaking hands with a gleeful-looking Paul Pierce after the Washington Wizards' 117-106 victory in Game 2 of the playoffs.

"Yo, @Drake, What the hell is this?" Kelly tweeted.

Yo, @Drake. What the hell is this? pic.twitter.com/F8KUzH1eDG

Pierce has been a lightning rod for the Raptors, causing controversy before the playoffs even tipped off when he said the Raptors don't have the "it" factor.

That comment led to a hefty fine for Raptors GM Masai Ujiri and the team. Ujiri was fined US$35,000 for uttering an expletive about Pierce when addressing the crowd in Maple Leaf Square. The Raptors were fined $25,000.

In last year's playoff series against Brooklyn, Pierce blocked Kyle Lowry's final shot of Game 7 to lift the Nets into the second round.