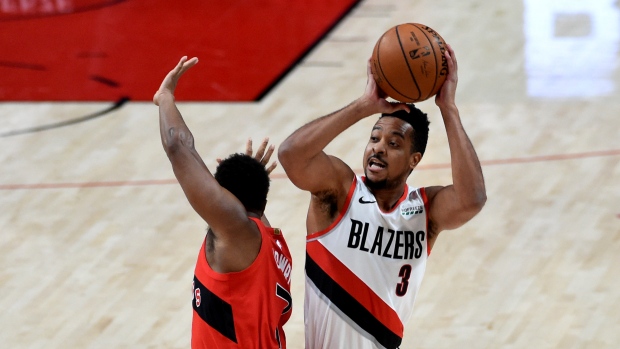 PORTLAND, Ore. — CJ McCollum scored 30 points, including the go-ahead jumper with 9.6 seconds left to give the Portland Trail Blazers a 112-111 victory over the Toronto Raptors on Monday night.

Damian Lillard added 23 points and Carmelo Anthony scored 20 off the bench for the Blazers, who erased a 17-point deficit and overcame Pascal Siakam’s first career triple-double of 22 points, 13 rebounds and 10 assists.

Siakam's potential game-winning shot rimmed out on the final play — for the second time in two nights. The same thing happened to him in a one-point loss Sunday to Golden State.

Portland starting centre Jusuf Nurkic went to the locker room in the first half with a bruised quadriceps and did not return. His replacement, Enes Kanter, did a solid job filling in with 14 points and six rebounds in 16 minutes off the bench.

Siakam gave the Raptors a 111-110 lead with 54 seconds left on a cutting layup. After an empty Blazers possession, Fred VanVleet missed a jumper on the other end for Toronto before McCollum put Portland ahead.

Siakam was dominant early, racking up 12 points, seven rebounds and five assists in the first quarter, which he capped by hitting a jumper at the buzzer. Toronto held a 32-21 lead after the Blazers shot just 36% in the period.

Kanter gave the Blazers their first lead at 61-60 in the third quarter. But the Raptors answered and led 86-76 heading into the fourth.

Siakam picked up his fifth foul while guarding McCollum with 6:37 remaining.

Trail Blazers: Portland coach Terry Stotts was asked before the game about the bench pairing of Kanter and Anthony, particularly on the defensive end. "I look at the net rating rather than offensive and defensive rating,” Stotts said. “The last four or five game they’ve been a net positive. There’s been a lot of conversation about that. I think Enes and Melo have played really well together the last five games.”

Raptors: Relying on a smaller unit again, coach Nick Nurse benched starting centre Alex Len for the entire second half. Fellow big man Aron Baynes did not play. Toronto began the day ranked 18th in the NBA in defensive rating, but held Stephen Curry to 2-for-16 shooting Sunday night against Golden State. According to Nurse, part of that was going small — but he hopes to find more time for Len and Baynes while still playing solid defence. "Our last six quarters of defence are what we’re used to,” Nurse said before Monday's game. “Maybe it’s some other factors, but it seems to me the small lineup has given us a chance to play that way. But again, we have to figure something out with those guys on the floor.”

Trail Blazers: Play on Wednesday at Sacramento, where they beat the Kings on Saturday by 26 points.

Raptors: Return to Tampa, Florida, where they will face the Charlotte Hornets on Thursday for the first in a stretch of five straight games.