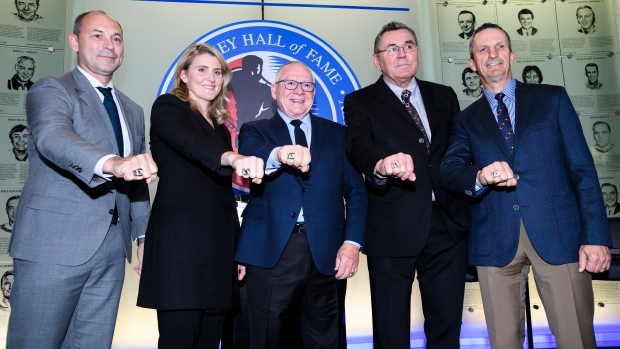 TORONTO — Hayley Wickenheiser hasn't had a lot of time to reflect.

As if there wasn't enough on her plate already, she then took on the role as assistant director of player development for the Toronto Maple Leafs in August 2018.

Wickenheiser finally got a chance to look back at her standout playing career, and its impact, on Monday night.

"It was not a common thing as a little girl to want to play hockey in the small town where I came from," Wickenheiser, a native of Shaunavon, Sask., said during her speech. "But my mom and dad believed that a girl could do anything that a boy could."

The road, however, wasn't easy.

Wickenheiser recounted sleeping in a closet for a week just so she could attend an all-boys hockey camp in Regina.

"I wanted to play the game so bad, I didn't care what I had to endure."

She went on to play for boys teams in Calgary — there weren't any for girls, and she'd tuck her hair under her helmet to avoid standing out — but still had to fight.

"I was taking the spot of a boy, and people didn't really like that too much," Wickenheiser told the audience at the Hockey Hall of Fame. "I actually developed an ulcer. I wasn't nervous to get hit or to go on the ice. That's actually where I felt good. It was when I had to come to the rink and change in the bathroom and then walk through the lobby of all the parents — the comments and the harassment I would often hear.

"Those things gave me thick skin and resilience."

She went onto have a stellar 23-year career with Canada and played professionally in Europe, blazing a trail at a time when the women's game was desperately looking for traction.

Named the MVP of both the 2002 and 2006 Olympic tournaments, the former centre is the seventh woman to be inducted into the hall.

"The first Olympics that we lost (in 1998) was not a fun one, but the four after that were some of the best experiences of my life," said Wickenheiser, who was Canada's flag-bearer for the opening ceremonies of the 2014 Games. "One of the greatest honours I've ever had was to put on that Canadian jersey."

The native of Sept Iles, Que., was an attacking force in junior, but transitioned to the other side of the puck in the NHL, becoming one of the game's premiere shutdown centres on the way to winning the Selke Trophy as the league's top defensive forward in 1988, 1989 and 1992.

Carbonneau, who retired in 2000 and waited 16 years before getting inducted in the hall, finished with 663 points in 1,318 regular-season games.

"I was dreaming about playing in the NHL, dreaming of winning the Stanley Cup, dreaming of scoring a goal in the playoffs," said Carbonneau, who added 93 playoff points. "But being inducted in the Hall of Fame? Never in my wildest dreams."

A smooth-skating defenceman with terrific vision, Zubov played 12 of his 16 NHL seasons with Dallas, registering 771 points in 1,068 regular-season games. The 49-year-old Moscow product added 117 points in the post-season, helping the New York Rangers hoist the Stanley Cup in 1994 before doing it again with the Stars in 1999.

Zubov, who also won Olympic gold in 1992 with the Unified Team after the collapse of the Soviet Union, said he didn't want to go to Dallas after getting dealt in 1996.

"Get me traded," he recounted telling his agent. "But (Stars GM) Bob Gainey did his homework and sent the most beautiful bouquet of flowers to my wife.

An NHL goalie from 1970 to 1983, Rutherford was named GM of the Hartford Whalers in 1994. He stuck with the franchise when it moved to Carolina to become the Hurricanes, and built the roster that won the organization's only Cup in 2006.

The 70-year-old from Beeton, Ont., took on the same role with the Penguins in 2014 and helped guide Pittsburgh to titles in 2016 and 2017, making him the only GM to win Cups with two different teams since the league expanded in 1967.

"Don't let anyone tell you (that) you can't do something, because that was the story of my career," Rutherford said. "And the more they told me I couldn't do things, the more it turned out that I did."

Nedomansky, 75, starred for 12 years in his native Czechoslovakia before becoming the first athlete from an Eastern European communist country to defect to North America to pursue a professional hockey career in 1974.

He played parts of three seasons in the World Hockey Association before jumping to the NHL with the Detroit Red Wings as a 33-year-old rookie.

"It was difficult, complicated, stressful," Nedomansky said of his decision to defect. "I'm so happy that I'm here."

The 74-year-old York, who's in his 48th season behind the bench, owns five NCAA titles, including four with the Eagles, and has the most wins in U.S. college history.

"I just love coaching," said the native of Watertown, Mass. "I love the people we coach."

But the night really was about Wickenheiser, who concluded by addressing her five- and six-year-old nieces in the audience.

"If they decide to play hockey, they can walk into a hockey rink anywhere in Canada with a hockey bag and a hockey stick over their shoulder, and nobody's going to look twice," she said. "They don't have to cut their hair short and run into the bathroom and try to look like a boy like I had to do to blend in. The road is just a little bit easier. I want to thank everyone that made that road easier for me and is continuing to pave the way.

"The game is truly for everyone."