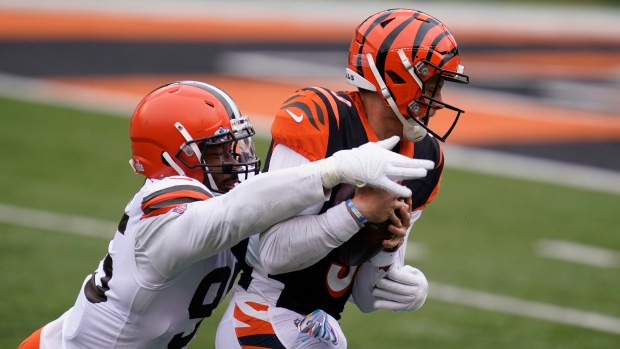 CLEVELAND — The Browns got back their most valuable defensive player and lost another vital one.

Myles Garrett is ready. Ronnie Harrison won't be for some time.

Cleveland's defensive star was activated from the COVID-19 list on Tuesday after missing two games with the virus. Garrett, who was leading the NFL in sacks when he got sick, has been cleared to return to practice this week as the Browns (8-3) get ready to play at Tennessee.

Garrett has been out since testing positive for the virus on Nov. 20 after he was isolated for two days while having symptoms. The Browns won both games without their best player — and one of the league's top defenders — and are relieved to have him back for their playoff push.

“I am excited to have Myles back,” right guard Wyatt Teller said. “Myles is a good guy, and he is my locker mate so I love seeing him. He is a great player and a great addition to our defence. There is a reason Myles is who Myles is. He going to bring a boost of morale to the defence.”

While they welcome back Garrett, the Browns said they'll be without Harrison, a hard-hitting safety who had been playing well.

Harrison was placed on injured reserve after tests showed he suffered a severe shoulder injury on Sunday against Jacksonville. Harrison will miss at least three games — and probably more. The Browns have five games left in the regular season.

Harrison got hurt while making a tackle on the Jaguars' first offensive play. The 23-year-old had been looking forward to facing his former team, which drafted him in 2018 and then traded him to Cleveland before the season. He returned an interception for a touchdown in his first start for the Browns.

Expecting Harrison would be out for some time, the Browns on Monday claimed safety Tedric Thompson off waivers from Kansas City. He has made 16 career starts with Seattle before joining the Chiefs.

Harrison's loss is the latest for a Cleveland secondary ravaged by injuries since training camp. Rookie safety Grant Delpit suffered a ruptured Achilles tendon in August, and starting cornerback Greedy Williams hasn't played because of a nerve injury in his shoulder.

Also, the Browns are expected to be without cornerback Denzel Ward for the second week in a row as he recovers from a calf strain. Ward was leading the league with 15 passes defenced when he got hurt against Philadelphia on Nov. 22.

Garrett's return comes as the Browns are preparing to face the Titans (8-3) and powerhouse running back Derrick Henry, who leads the league with 1,257 yards. Henry had 178 yards and three touchdowns in Sunday's win over Indianapolis.

Garrett, who was suspended for the final six games in 2019 for hitting Steelers quarterback Mason Rudolph with a swung helmet, had been playing better than at any point during his career. He's stated numerous times that one of his goals this season is to be the NFL's Defensive Player of the Year.

He's back in the hunt.