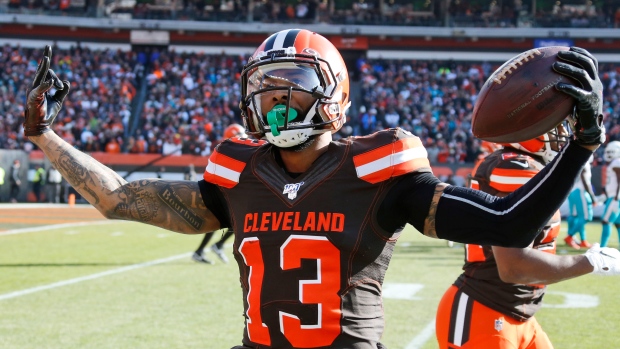 CLEVELAND — Odell Beckham Jr. gave each of his Browns teammates a new pair of his signature Nike sneakers on Monday.

It's unclear if they're Christmas presents or going-away gifts.

Beckham's gesture could not have been more perfectly timed from a personal public relations standpoint. It came amid reports over the past two days that the star wide receiver is unhappy in Cleveland, frustrated with his lack of production and at odds with the team's coaching staff.

One report even said Beckham has gone as far as telling opposing players and coaches during games to "come get me” in the off-season.

On Monday, Browns first-year coach Freddie Kitchens, whose job title should maybe include ringmaster — or ring leader — for this strange, swerving, circus-like season in Cleveland, said he has no problems with Beckham and he's not convinced he wants out.

Like his coach, Browns centre JC Tretter feels Beckham has fit in and is buying into the system. That's not to say there haven't been growing pains in Cleveland's offence, which has not found a consistent rhythm despite an abundance of talent. Tretter said Beckham has “been a model citizen” with the Browns and believes he has team-oriented goals.

“He can be frustrated that he wants to do more and wants to get more opportunities, but that doesn't always mean it's a shot at anybody or it's a negative for the team,” Tretter said. “That's just kind of the balance of playing a team sport with kind of an individual aspect to it where he wants to do whatever he can to help the team win, and usually that is catching balls and making plays.

"From what I've spoke with Odell about, he cares most about winning.”

The latest Beckham sideshow — and quarterback Baker Mayfield's stunning criticism of the team's medical staff — soured Sunday's 27-19 win over the Cincinnati Bengals that kept the Browns (6-7) in the playoff race, albeit in a precarious outside position.

Following the game, Mayfield came to Beckham's defence by accusing the team's trainers and doctors of mishandling the wide receiver's nagging injury. Beckham has been dealing for months with a sports hernia that will likely require off-season surgery. Mayfield, whose mouth has gotten him into trouble before, exacerbated an already delicate situation when he said the injury “wasn’t handled the right way in our training room.”

Mayfield quickly walked back his biting remarks with a pseudo apology on Twitter, saying he wasn't trying to “throw our medical staff under the bus.”

But by then, the damage was done. Kind of like when Browns star defensive end Myles Garrett swung a helmet and clobbered Steelers quarterback Mason Rudolph.

Kitchens said the team is not considering shutting down Beckham for the final three games, and he talked to Mayfield about his outspokenness.

"We don't want him addressing other players' injuries, in that manner especially," said Kitchens. "Odell and our training staff have done a tremendous job of getting Odell to the game each and every week. It's been addressed and he (Mayfield) understands how to handle things like that moving forward.”

Kitchens didn't run the ball early on the Bengals, who came in with the league's lowest-ranked rushing defence. He made the simple, obvious adjustment at halftime by giving the ball to NFL rushing leader Nick Chubb, who picked up 99 of his 106 yards in the second half.

Garrett's indefinite suspension, along with defensive end Olivier Vernon's sprained knee, have taken the bite out of Cleveland's defence, and especially the pass rush. The Browns struggled to put pressure on Bengals quarterback Andy Dalton, and the Bengals rolled up a season-high 179 yards rushing.

Cornerback Denzel Ward's 61-yard interception return for a touchdown is the kind of play the Browns have been hoping to get from the 2018 first-round draft pick, who has struggled at times in his second season.

Kitchens and his staff have been pushing Ward for more and he responded following a tough game the previous week in Pittsburgh.

Mayfield had his second straight so-so performance (11 of 24 for 192 yards). He threw two interceptions and was lucky a third pick was erased by a pass interference review.

Still, Kitchens believes the second-year QB has made strides despite a statistically down season.

Vernon missed his fourth game with a sprained knee. He practiced and wanted to play, but the Browns thought another week off might help.

2 — The number of catches for Beckham on Sunday as well as his total of touchdowns and 100-yard games this season.

A visit to Arizona, where the warm weather will be a welcomed December departure. The Browns must win their final three games and hope Pittsburgh, Tennessee and Buffalo all collapse down the stretch to get a wild-card spot.