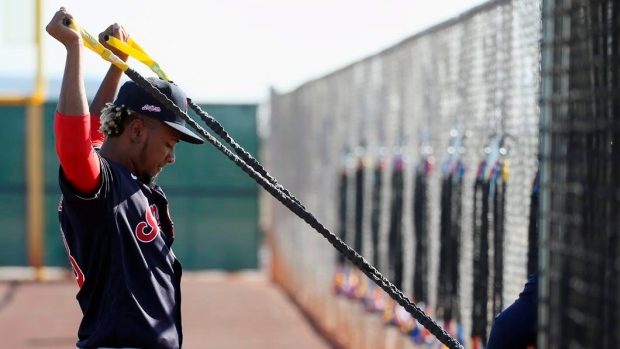 GOODYEAR, Ariz. — Indians reliever Emmanuel Clase could be sidelined three months with a strained back muscle, another blow to Cleveland's pitching staff.

The hard-throwing Clase, the centerpiece of an off-season trade that sent two-time Cy Young Award winner Corey Kluber to Texas, experienced upper arm discomfort following a bullpen session last week. He continued to have issues this week and the Indians had him undergo imaging tests Wednesday.

An MRI confirmed a moderate strain of the teres major muscle in his upper back. The team said he will be re-evaluated weekly, but the 21-year-old is expected to miss 8-to-12 weeks of game activity.

Clase was expected to have a role in the back end of Cleveland's bullpen.

It's been a tough start to camp for Indians pitchers as starters Mike Clevinger (knee surgery), Carlos Carrasco (hip flexor) and Aaron Civale (sore groin) are all sidelined. Clevinger is making progress but is not expected to be ready for major league games until at least mid-April.

Clase's fastball has been clocked over 100 mph. He made 21 appearances for the Rangers last season and recorded 21 strikeouts in 23 1/3 innings.

Before being hurt, he had been impressive this spring. Manager Terry Francona noted after a session earlier in camp that Clase was "throwing 100 mph bowling balls. It was heavy. It looked really heavy.”