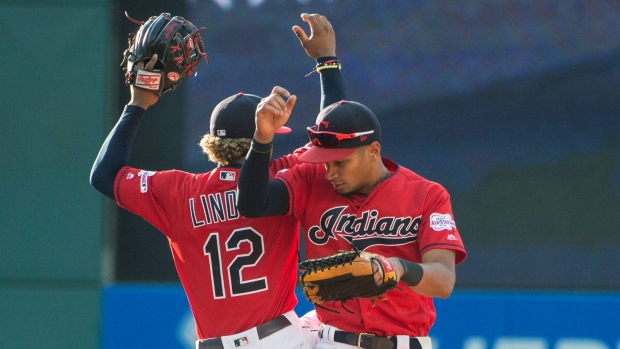 CLEVELAND — The Indians' clubhouse is buzzing with activity about three hours before a three-game series opener against the defending World Series champion Boston Red Sox, whose season could be over by October.

For a stretch, Cleveland's post-season plans were in serious doubt.

As players kill time before the first pitch, several relievers recline in black leather chairs at their cubicles, scanning phones while right-hander Tyler Clippard closes his eyes and grabs a quick nap on one of the large couches nearby.

Looking for a fight, third baseman José Ramírez, who is finally swinging the bat like an All-Star again, barrels out of the shower area and shouts at rookie outfielder Oscar Mercado, who rolls his eyes.

It's business as usual. Nothing out of place.

And, according to All-Star MVP Shane Bieber, that's the key behind the Indians' stunning turnaround this season — same routine, consistency, treat every day and every game just like the one before it.

"Except, today, I just put on gray pants," Bieber said with a laugh before stripping down and grabbing the home whites.

Bieber's wardrobe mishap aside, the Indians are doing most everything right these days.

After going through the motions for much of April and May, they've been baseball's best team for more than the past two months, playing .694 ball (43-19) since June 4 while chipping away at Minnesota's 11 1/2-game lead to move back into a race for first place in the AL Central that could go down to the wire.

After a 5-1 loss at home to Boston on Wednesday, the Indians next face a tough test — a four-game series at Yankee Stadium against a New York team that has the best record in the AL.

Under manager Terry Francona's skilled touch, the Indians have made their climb back to contention despite a slew of injuries to the team's strongest area — the pitching staff.

Two-time Cy Young winner Corey Kluber has been out since May 1 after having his right arm broken by a line drive during a start at Miami, and steady starter Carlos Carrasco, a 17-game winner in 2018, was diagnosed in June with a treatable form of leukemia.

Mike Clevinger missed two months with a back injury that initially threatened his season, and All-Star shortstop Francisco Lindor sat out the first 19 games with an ankle injury that still affects him.

There have been other issues, including Ramirez's mysterious slump that seems solved and a blockbuster trade at the July deadline when the Indians ' front office pushed all in for the season by dealing Trevor Bauer, the club's best pitcher in stretches, to Cincinnati in a three-team deal that brought back sluggers Yasiel Puig and Franmil Reyes.

It's been bumpy, unconventional (rookie pitchers Zach Plesac and Aaron Civale have made quality starts) and dramatic. But the Indians, whose 71-year World Series drought is the majors' longest, survived and are now thriving.

"It's been a total team effort, and by total I mean even part of our Triple-A," Francona said.

"It feels right," said Bieber, the polished 24-year-old who has grown from impressive rookie to Cy Young candidate in just two seasons. "I feel like this is exactly what we thought we were capable of, and we know this is kind of our brand of baseball and it's nice to be able to put this together and put this little run together."

Ramírez's reversal has been pivotal.

After batting around .200 until mid-June and looking completely lost at the plate, the energetic third baseman, who finished third in MVP voting the past two seasons, has been on a tear.

Ramírez has batted well over .300 since June 21 with 19 doubles, 12 homers and 39 RBIs, and returned to being the one batter in the lineup pitchers least want to face in a big spot.

Indians fans are once again serenading him with "José, José, José" chants each time he digs into the batter's box at Progressive Field.

"He's a great player," said Francona, who loyally supported Ramirez during his slump. "He just got caught up in some bad habits hitting and it took him a while."

His two-month comeback isn't the only turnaround as Carlos Santana, who left as a free agent after an eight-year stay in Cleveland only to be re-acquired in a trade, has been the Indians' steadiest hitter.

Since returning to Cleveland — "my sweet home" — he has become an American citizen, a first-time All-Star and delivered in the clutch.

After closer Brad Hand blew a save on Sunday, Santana hit a grand slam in the 10th inning to give the Indians a win at Minnesota, pushing them into a first-place tie.

The next night, he homered leading off the ninth to give Cleveland a 6-5 as the Indians leapfrogged the Twins to lead the division for the first time since April 19.

"There's never a doubt when we're down a run or two, even three," Plesac said afterward. "Our offence is so good, you feel confident that we're going to come back."

The next day, the Indians' clubhouse looks and feels the same.

Hand and Nick Goody are locked in a serious pingpong match while Ramirez, perhaps baseball's best Mario Kart player, convinces Clippard to take him on in the popular video game.

While left-hander Oliver Perez shuffles a deck of cards nearby, Bieber's getting dressed for tonight's game.

He's got the correct pants this time.