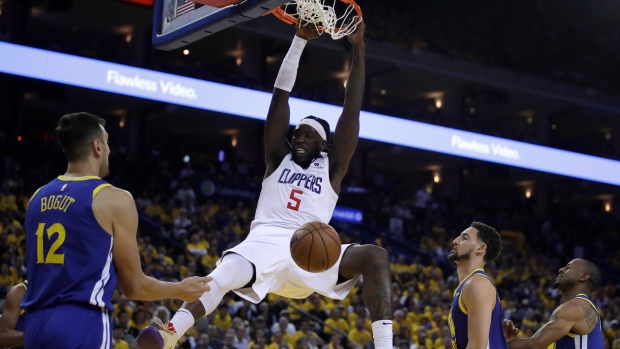 The Los Angeles Clippers are hoping to infuse some payback when they return home to take on the Golden State Warriors in Game 6 of their Western Conference first-round series on Friday night.

The Clippers staved off elimination by winning Game 5 in Oakland on Wednesday night. They were in a similar position last week after winning Game 2 on the road to tie the series at 1-1, but dropped the next two in Los Angeles.

"We want to do right by them," Rivers said. "My guess is there were probably not a lot of tickets sold, because I don't think a lot of people thought Game 6 would happen, but I think our guys did, and that's all that mattered."

Golden State left the door open for a Game 6 by delivering a below-average defensive performance in the 129-121 loss on Wednesday, while the Clippers shot 54.1 per cent from the field.

"Not what we're used to, but there's no panic at all," said Warriors point guard Stephen Curry, who led Golden State to three of the past four NBA championships. "Our message to each other going into Game 6 is, yeah, we would have loved to have come in and win four straight, or close it out (Wednesday) night. Doesn't change what the goal is. The goal is to win four games, move on to the next series and start it all over again."

Los Angeles was far more reserved after its latest win in Oakland. The Clippers are plenty aware that they shot 56.5 per cent from the floor in Game 2, only to turn around and shoot 37.2 per cent in Game 3.

"We learned a lesson, and (the Warriors) taught us it," Rivers said. "They were a great teacher for us."

The Clippers are hoping forward Danilo Gallinari picks up where he left off last game as well.

Gallinari scored a team-high 26 points in Game 5. He shot 9-for-22 from the floor, below his regular-season shooting percentage of 46.3, but much better than the 7-for-33 he combined to shoot in Games 3 and 4.

"I think he'll be even better in Game 6," Rivers said. "I think he now knows where he can score from."

Curry acknowledged how difficult it is to guard the Clippers.

Not only do they have an energetic starting five, but reserves Lou Williams and Montrezl Harrell are two of their most dangerous players.

"They have talent all over the floor," Curry said. "They've got guys that can knock down shots, and their bench, it's been talked about all year with what Montrezl and Lou bring. ... We have to take those away the best we can."

Nobody is happier to see the Clippers still playing than their broadcaster Ralph Lawler, whose retirement has been extended by this postseason run. Lawler has been the team's broadcaster for 38 of the past 40 years.

Rivers said Lawler had a special message for him before Game 5.

"Ralph never speaks to me before the game when I'm on the floor, and he walked up to me, first time ever, and said, 'Coach, I've had too many people congratulate me on my career and say good luck, like tonight is the end of Ralph. Please, do something about that,' " Rivers said. "So Ralph, we did."