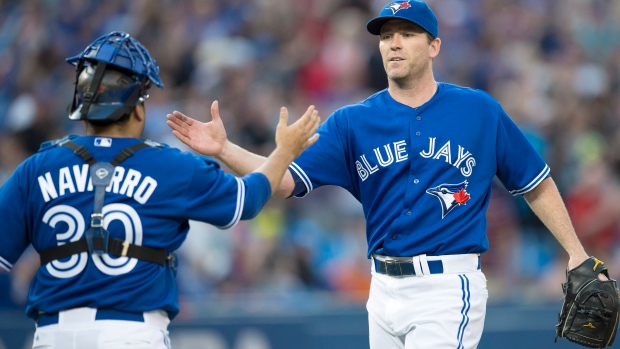 And despite the fact his 1-2-3 ninth inning came in a 1-0 loss to the Baltimore Orioles, the veteran right-hander got a nice ovation from the Rogers Centre crowd Sunday.

Everyone knew it may be the last time the 33-year-old right-hander pitches as a Blue Jay after a major league career that began in Toronto in 2006.

Janssen, who made US$4 million this season, faces free agency.

"He ought to feel good. He's had a nice major league career to this point, and that will continue."

Janssen was rewarded with a nice ovation from the capacity crowd if 45,901 as he walked off.

The California native converted 90 of 107 save opportunities as a Jay with 29 wins and 24 losses. He started 22 games for Toronto earlier in his career.

"I got promoted (to the major leagues), was a starter, then got the opportunity to close," he said. "For that I'm forever grateful.

"I just apologize to the fans and everyone that we couldn't bring a playoff and a championship here, because deep down inside that's all I wanted to do. It's disappointing in that regard."

Janssen converted 25 of 30 save opportunities this season, while going 3-3 with a 4.03 earned-run average. But he had trouble rebounding from a virus suffered during the all-star break in the Dominican Republic.

Going into the season finale Sunday, Janssen had a 6.75 ERA with opposing batters hitting .309 since the all-star break. Prior to that, he had a 1.23 ERA while limiting hitters to a .217 average.

While he says he hasn't closed any doors yet, he faces having to possibly move on.

"This is all new to me. Saying goodbye is tough," he said. "But I appreciate everything — the fans, the city —everything has been great. I'm just grateful to finish the season healthy and go out on a nice note."

He is the third Toronto pitcher to record three straight 20-save seasons, joining Tom Henke and Billy Koch.