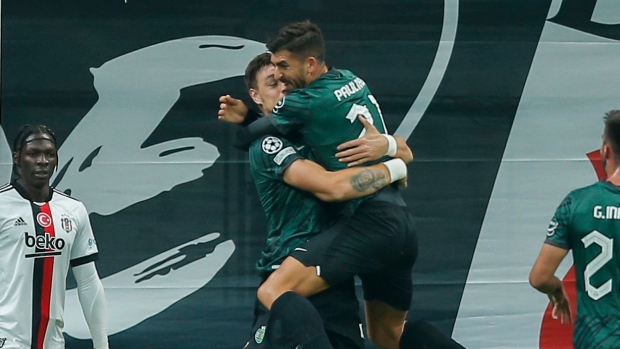 ISTANBUL (AP) — Sebastian Coates waited years to score his first Champions League goal but only 12 minutes for the next one, a near-exact copy.

The Sporting Lisbon captain scored two headers in almost identical circumstances and won a penalty for good measure, as he led his team to a 4-1 win against Besiktas in the Champions League on Tuesday.

Uruguayan defender Coates was left unmarked in front of goal to head in when Pedro Goncalves' corner was flicked on by Goncalo Inacio at the near post in the 15th minute. Canadian forward Cyle Larin equalized for Besiktas nine minutes later with a towering header from another corner.

Sporting restored the lead in the 27th with Coates' second header, from the same position, again after a corner was flicked on. Coates was playing his 13th Champions League game since his debut in 2016 and the former Liverpool player had never scored in Europe's top-tier club competition before.

Coates nearly made it a hat trick with yet another header from a corner, but this time Besiktas captain Domagoj Vida put his arm in the way and the Croatian gave away a penalty converted by Pablo Sarabia just before halftime. Paulinho hit the post and the crossbar in the second half, and finally scored with a curling shot in the 89th.

Video review denied Besiktas a spectacular goal when Alex Teixeira stretched to volley a lobbed pass into the top corner, only for a replay to show he was just offside. His teammate Michy Batshuayi wasted chances by repeatedly drifting offside and rounded the goalkeeper before shooting harmlessly high and wide.

Both teams had lost two matches going into Tuesday's game, and Sporting is third with the win. Ajax beat Borussia Dortmund 4-0 in the other Group C game. Ajax is top with nine points, three more than Dortmund.