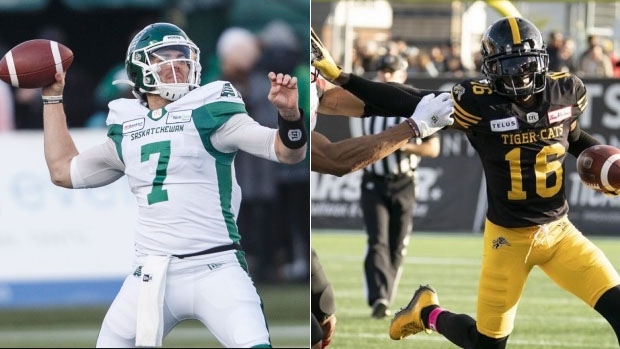 Fajardo earns the nod after opening the season as a backup, but quickly took over the lead job once Zach Collaros went down with an injury and led the Roughriders to a 12-5 record. The 27-year-old was tops in the CFL in 2019 with 4,302 passing yards and threw 18 touchdowns to eight interceptions.

Banks, who was named an East All-Star for the fifth straight year Wednesday, led the CFL in receptions, receiving yards and touchdowns this season. His 112 catches set a Tiger-Cats franchise record as he posted 1,550 yards with 13 touchdowns.

Tiger-Cats linebacker Simoni Lawrence, who led the league with 95 tackles, and Winnipeg Blue Bombers defensive lineman Willie Jefferson, who had 12 sacks and one interception this season, were named as finalists for the most outstanding defensive player.

Linebackers Cameron Judge of the Roughriders and Henoc Muamba of the Montreal Alouettes were named finalists for the league’s Most Outstanding Canadian. Judge had 72 total tackles this season with two interceptions and five sacks. Muamba posted a team-high 93 tackles with one sack.

Blue Bombers tackle Stanley Bryant will have an opportunity to repeat as the league’s top lineman for the third straight year on Nov. 21. He was named a finalist Thursday along with Tiger-Cat Chris Van Zeyl.

Mike Miller of the Blue Bombers and Frankie Williams of the Tiger-Cats were named finalists for top special teams player, while Calgary Stampeders linebacker Nate Holley and Alouettes wide receiver Jack Wieneke will compete for Most Outstanding Rookie honours.

Two first-year head coaches were named finalists for coach of the year: Craig Dickenson of the Roughriders and Orlondo Steinauer of the Tiger-Cats, both of whom coached their teams to first-round byes in the postseason.

The award winners will be revealed on Nov. 21, during Grey Cup week in Calgary.