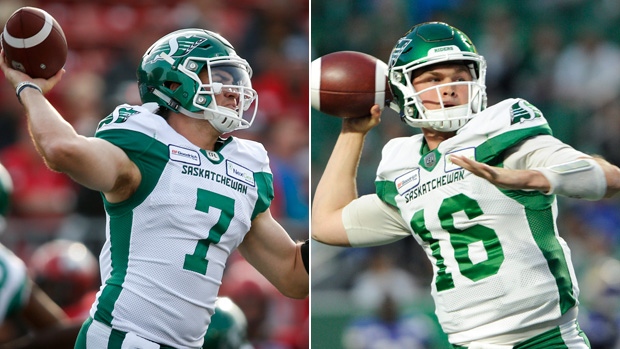 After Zach Collaros was placed on the six-game injured list Sunday, the Saskatchewan Roughriders need a starting quarterback for the foreseeable future.

And while the team signed veteran backup Bryan Bennett Monday, Cody Fajardo and Isaac Harker will get the first shots at replacing Collaros.

The two both saw action in the Roughriders’ season-opening loss to the Hamilton Tiger-Cats Thursday after Collaros left the game after only the third play from scrimmage. Fajardo replaced Collaros and went 9-17 for 66 yards passing, and rushed seven times for 34 yards and a touchdown. But Fajardo was injured as well – limping off the field in the third quarter after a hit – and Harker came in and went 8-14 for 128 yards and two interceptions.

The Roughriders return to action Thursday against the Ottawa Redblacks, and head coach Craig Dickenson said both Fajardo and Harker will see action.

TSN.ca looks at the Roughriders’ quarterbacks vying to lead the team in Collaros’ absence.

Fajardo: The 27-year-old was originally signed to the Toronto Argonauts’ practice roster in 2015 before joining the Double Blue’s active roster in 2016. After two seasons in Toronto, Fajardo joined the BC Lions last season.

Fajardo is 52-85 for 480 yards, five touchdowns, and one interception throwing the ball over his four-year CFL career. He’s also a threat running the ball and opened the season as the Roughriders’ short-yardage quarterback. The California native has 129 carries for 471 yards and 14 touchdowns in the CFL.

Prior to his time in the CFL, Fajardo had a brief off-season stint in the NFL with the Oakland Raiders. He was a four-year starter at Nevada, throwing for 9,659 yards, 57 yards, and 29 interceptions over 45 games. He also twice eclipsed the 1,000-yard rushing mark in college and finished with 3,482 yards and 44 touchdowns at Nevada.

Harker: The Week 1 loss to the Tiger-Cats was Harker’s first action in the CFL. The 23-year-old signed with the Roughriders ahead of training camp after four seasons in NCAA FCS and one season in Division II. While playing for the Colorado School of Mines in 2018, Harker threw for 3,858 yards and a Division II-leading 39 touchdowns.

Prior to that, Harker spent four seasons with Indiana State, throwing for 3,259 yards and 22 touchdowns in 22 games.