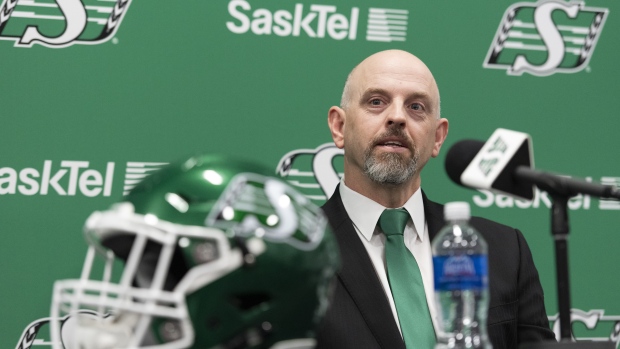 Just one game into his CFL head-coaching tenure, Craig Dickenson of the Saskatchewan Roughriders has a quarterback dilemma.

Starter Zach Collaros is on the six-game injured list. He was hit in the head by Hamilton linebacker Simoni Lawrence while sliding in the Tiger-Cats' 23-17 season-opening home win over the Riders on Thursday night.

Veteran Cody Fajardo replaced Collaros and completed 9-of-17 passes for 66 yards while rushing seven times for 34 yards and a TD. Isaac Harker, a rookie from the Colorado School of Mines, saw second-half action and finished 8-of-14 passing for 128 yards with two interceptions.

Dickenson plans to give both players reps in practice before deciding who'll replace Collaros. Trouble is, Dickenson doesn't have the luxury of time as Saskatchewan visits the Ottawa Redblacks on Thursday night.

While Dickenson didn't name a starter Monday, he did say both Fajardo and Harker will see action Thursday night.

"I'm not going to tell you who's going to start because I don't honestly know right now," Dickenson told reporters in Regina. "But we know both of them will play in this game and I can just leave it with that.

"Ultimately everybody wants to have a guy who plays a lot because the more reps you get the better you are . . . the reality is they're both good players and both bring different things to the table so we'll let them both play and contribute."

Whoever starts will have the benefit of a solid ground attack as Saskatchewan rushed for 172 yards and two TDs on 32 carries against Hamilton. The Riders also had the ball for over 36 minutes but committed a fumble, two interceptions and turnover on downs.

Reilly will lead the B.C. Lions into Edmonton on Friday night. The veteran quarterback spent six seasons with the Eskimos, leading them to a '15 Grey Cup title, before signing a four-year, $2.9-million free-agent deal with the Lions.

Reilly enjoyed a stellar run with Edmonton. The 34-year-old threw for over 5,500 yards in each of his final three years there and was '15 Grey Cup MVP and '17 CFL outstanding player.

Reilly also twice rushed for over 600 yards (including career-best 709 yards in 2013) with Edmonton. And over his last three seasons in Alberta, Reilly ran for 34 TDs, including a career-best 13 last year.

Reilly completed 22-of-39 passes for 324 yards with a TD and two interceptions in B.C.'s season-opening 33-23 home loss to Winnipeg. Reilly hit Bryan Burnham five times for 153 yards while Lemar Durant and Duron Carter both had six catches for 75 and 65 yards, respectively.

Durant was on the receiving end of Reilly's TD strike.

Trevor Harris, Reilly's replacement in Edmonton, enjoyed a solid Eskimos debut. The 33-year-old, who led Ottawa to a Grey Cup appearance last season, was 32-of-41 passing for 447 yards and three TDs in a 32-25 home win over Montreal on Friday night.

Running back C.J. Gable also ran for 154 yards on 20 carries (7.7-yard average) while adding three catches for 29 yards and a touchdown. Ricky Collins registered nine catches for 175 yards while Kenny Stafford had seven receptions for 98 yards and two TDs.

Gable was one of four 100-yard rushers last week. The others were Winnipeg's Andrew Harris (148 yards on 16 carries versus B.C.), Ottawa's Mossis Madu (112 yards on 24 carries versus Calgary) and Saskatchewan's William Powell (104 yards, TD, on 20 carries versus Hamilton).

By comparison, Harris and Reilly were the only 300-yard passers last week versus Montreal and Winnipeg, respectively.

Dominique Davis was 29-of-44 passing for 276 yards and four interceptions in Ottawa's season opener at Calgary. But he also scored three rushing TDs as the Redblacks rallied from a 21-6 deficit for a 32-28 victory in a rematch of last year's Grey Cup game, won 27-16 by the Stampeders at Commonwealth Stadium.

LOFFLER IMPRESSIVE: It was an impressive Montreal debut for safety Taylor Loffler.

The six-foot-four, 225-pound Kelowna, B.C., native had a game-high 10 tackles in Montreal's season-opening 32-25 road loss to the Edmonton Eskimos on Friday night. The 27-year-old signed with the Alouettes as a free agent after spending his first three CFL seasons with Winnipeg.

Loffler's performance wasn't surprising given he had 185 tackles in 50 starts with Winnipeg and earned CFL all-star honours each season. However, his stats Friday night are concerning for Montreal.

That's because it's never a good sign for a defence when its leading tackler comes from the secondary. Four of Montreal's five leading tacklers against Edmonton were defensive backs.

Montreal's defence also had no sacks against Edmonton. The Alouettes next play June 28 in Hamilton.

STICKY ISSUE FOR CFLPA: The CFL's suspension of Hamilton Tiger-Cats linebacker Simoni Lawrence causes a bit of a conundrum for the CFL Players' Association.

Lawrence received a two-game ban Monday for delivering a hit to the head of sliding Saskatchewan starter Zach Collaros early in the Ticats' season-opening 23-17 home win over the Riders on Thursday night.

Lawrence can appeal the suspension and if he does, then it's incumbent upon the union to vigorously defend his best interests. However, Collaros is also a CFLPA member and his safety and well being must be front and centre.

During the latest round of collective bargaining, improved player health and safety was a priority for the CFLPA.

MR. AUTOMATIC: Lewis Ward has picked up where he left off last season.

On Friday night, the Kingston, Ont., native made all three of his kicks in Ottawa's 32-28 road win over the Calgary Stampeders. Heady stuff considering Ward worked as a security guard in 2017 at TD Place when the Toronto Argonauts upset Calgary 27-24 in the Grey Cup game there.