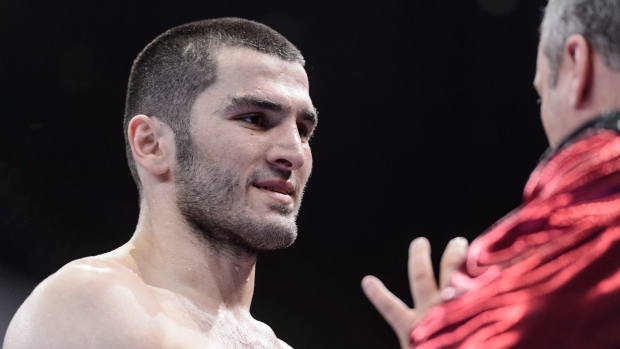 Saturday marks the third day of the most anticipated tournament of the year - March Madness. Unfortunately, by then, chances are a 14th-seeded school that you’ve never heard of has knocked off a powerhouse team, ruining all that research you’ve put into constructing the perfect bracket.

Fortunately, there’s options other than watching March Madness with no hope of winning, and I’m not only talking about The Office reruns for the 15th consecutive time. A big weekend of boxing is upon us featuring a light heavyweight title fight right here on TSN and a massive bout which has the makings to end in a colossal upset.

Have you ever heard the saying that bad things come in three? Well, for the IBF and WBC light heavyweight champion Artur Beterbiev, bad things have simply just seemed to happen over the past few years. Since defeating Oleksandr Gvozdyk in 2019 (via 10th round KO) to claim the WBC belt, the champion fighting out of Montreal has been inactive due to no fault of his own. Beterbiev was scheduled to fight worthy challenger Meng Fanlong last March, but that fight was put on the back burner due to Covid-19. With Fanlong unable to secure a visa for a bout, the not-so-worthy challenger 19-1-1 Adam Deines was called upon to step-in against the consensus number one light heavyweight in the world. Four cancelled dates later between the two, we have (hopefully) finally arrived at the anticipated return of Beterbiev, set to take place in Russia on Saturday. A gift for all of us to see the knockout machine back in action, but a curse for the challenger Deines.

At 15-0, Beterbiev has not only earned his name atop the light heavyweight division, but also one of the most feared men in the sport. The Montreal resident has shown to have incredible power and a devastating right hand ending each of his 15 fights by way of KO/TKO, with the adversary lasting past the sixth round just three times. In fact, Beterbiev is responsible for handing nine of his opponents their first knockout loss, which includes three fighters who were undefeated prior to stepping in the squared circle with Beterbiev.

After suffering his first loss to Beterbiev’s original challenger Fanlong, Adam Deines has won his last two fights against opponents boasting just a combined 11-12 record. I can’t tell you why or how Dienes became the mandatory challenger to the best light heavyweight in the world after facing a ‘daunting’ row of opponents. Sometimes in this sport unfortunately, politics trump what is right and fair. What I can tell you though, is that in no dimension is Deines a match for Beterbiev. On the outside looking in, Dienes seems to be rather fortunate, skipping a line of worthy contenders to fight for a title due to the circumstances surrounding the pandemic. But come Saturday afternoon, it’ll become very clear this matchup with Beterbiev was anything but fortunate for Deines when lying on the canvas.

Cody’s Pick: Beterbiev via knockout in six rounds or less

On the same day Beterbiev defends his title halfway across the world, another fighter with a 100 per cent knockout rate will also put his undefeated record on the line in Texas. Vergil Ortiz Jr. (16-0, 16 KOs), last defeated Toronto resident Sammy Vargas via seventh-round knockout in July of 2020, further adding to the notion that this is the next superstar in the already stacked 147-pound division. Now despite being a heavy favourite, the 2019 Ring Magazine prospect of the year has a tall task ahead of him come Saturday night, the toughest of his career in Maurice Hooker.

Hooker (27-1-3, 18 KOs), is a former champion at junior welterweight (140 pounds), who has proven himself time in and time out against the best in the world. His one loss came at the hands of current champion and top 20 pound-for-pound fighter in the world Jose Ramirez via knockout in 2019, and has since decided to test the waters at a new weight class. Now I’m no scientist (I work at TSN), but usually when a fighter suffers a knockout against a fighter at a lower weight class, you can come to the conclusion that it could certainly happen again against a bigger adversary with a 100 percent knockout rate. However, I truly don’t think that is the case this time around. Just because one is hurt by a smaller opponent, doesn’t mean they can’t take a punch from a stronger fighter. Hooker has made reference in the past to his performances being impacted by a drastic weight cut down to 140. He’s now fighting closer to his natural weight, and the more in shape you enter a bout, the more punishment you can withstand. If this truly is the case as Hooker believes, then Ortiz Jr. is in for a fight.

The 31-year-old former champion not only comes into this fight against Ortiz Jr. with a height and reach advantage, but most importantly with experience as an underdog. Hooker entered his bout with then undefeated Terry Flanagan back in 2018 as a massive +400 underdog, and went onto defeat Flanagan in his own country of England. In his very next fight, Hooker knocked out Alex Saucedo, a young prospect who was supposed to beat Hooker, sound familiar?

Ortiz Jr. is a massive -1200 favourite here, but I truly believe these odds are based more on hype than anything else. Ortiz Jr. is a fantastic fighter with exceptional power, and can prove the hype is certainly real on Saturday night. But this is a massive step up in competition for him and the odds are just too big not to take chance on an experienced and proven fighter in Maurice Hooker.