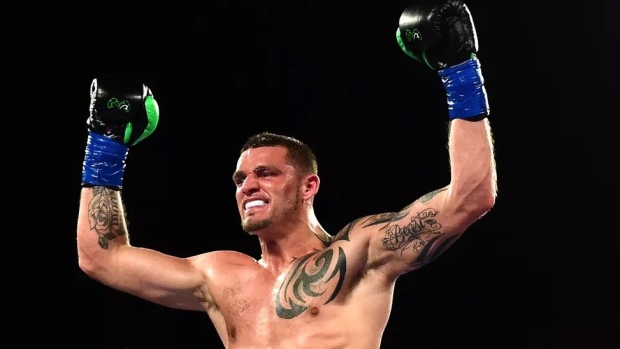 *UPDATE: Maxim Vlasov tested positive for COVID-19 and the fight against Joe Smith Jr. will take place at a later date*

On July 12, 2017, A (very) fashionably late Floyd Mayweather arrived at Budweiser Stage to the sound of boos, for the second leg of a set of infamous press conferences that took place that summer.  While Floyd was met with tons of trash talk from his future opponent, I remember him distinctly clapping back with one saying of his own, asking his team on numerous occasions to “point to the easy work.”

The easy work Mayweather’s team was asked to point to was none other than Conor McGregor.  For the most part, that statement proved to be true, knocking out the two-time UFC Champion in 10 rounds.

Now, with Floyd Mayweather gearing up for the fight of his life against 0-1 boxing sensation/prodigy Logan Paul, he surely will not have any easy work to point to this time around.  Someone needs to take the reins, and that is where I come in.  Each week, I will seemingly point you towards the easy work with my knockout picks of the week, and all you have to do is follow along.

On Saturday night on TSN5 (10pm et), Joe Smith Jr. will try to capture his first world title, as he takes on Maxim Vlasov for the vacant WBO Light Heavyweight championship.  Now, Smith Jr. is not your average professional boxer on the verge of fighting for a world title, in reality he is quite literally the definition of one of his nicknames, “The Common Man”.  Smith Jr. is a member of the Labour Union in Long Island, who shares that hard-working gritty mentality with the rest of the working class inside and out of the ring.  In fact, the perennial underdog has gone through a daunting list of opponents to get into the position of where he is today.

Working class, underdog, common man, with these adjectives you may think I stole the script of Rocky from Sylvester Stallone himself.  Smith Jr. has been called the real life Rocky before, as the similarities seem endless.  However, there is one budding difference between the two, and that is that Joe Smith Jr. hits HARD.  Just ask former Light Heavyweight champion Eleider Alvarez, who has never been knocked out prior to his last bout, when Smith Jr.  knocked him through the ropes in the 9th round to cash as a massive underdog.  Or, maybe Bernard Hopkins, who Smith Jr. as a +200 underdog, sent literally and figuratively through the ropes, right out of the ring and into retirement, becoming the first fighter to knock out Hopkins in 67 (yes, 67) fights. Smith Jr. has always been an underdog in life and in boxing, but with 21 of 26 wins coming by way of knockout/technical knockout, his power is not something to be underestimated.

While Smith Jr. is often referred to as the real life Rocky, other than sharing the name nationality, you probably won’t hear Maxim Vlasov compared to Ivan Drago all that much.  Vlasov has the record of 45-3, but his last two losses came at the hands of two fighters who were considered a step up in competition. I’m not saying Vlasov's record is as padded as a fighter (YouTube personality) who defeated a retired NBA player and now thinks is the best fighter on the planet, but I am saying his competition is nowhere near the opponents Smith Jr. faced to get to where he is today.  Although Vlasov has never been knocked out before, Smith Jr. has proven he hits a little harder than most light heavyweights on the planet.  When all is said and done on Saturday night, Vlasov will have shared one more similarity with Ivan Drago, and that is having been knocked out by a working-class American.

When the 31-1 Joseph “JoJo” Diaz upset Tavin Farmer last January to capture his first major title that always seemed to allude him, JoJo made it clear he wanted to defend his title against the toughest competition possible.  Diaz held true to that promise, as he’s set to defend his IBF Junior Lightweight title against the relatively unknown but powerful mandatory challenger, Shavkatzdhon (Shavkat) Rakhimov. Although the favourite in this fight, Diaz will enter the bout with a chip on his shoulder. JoJo is often clamoring at the masses to put respect on his name and will look to prove he’s here to stay with a statement win over Rakhimov.

Despite having proven devastating power (recording 12 knockouts in 15 fights) there’s more questions than answers with Shavkatzdhon Rakhimov.  In his last bout against Azinga Fuzile, the 26-year-old Russian native was outboxed until landing a vicious knockout in the 8th round.  However, the bout was hotly contested after video evidence emerged of Rakhimov being administered smelling salts during the bout.  Although we’re all use to seeing NHL players on BarDown getting jacked up on smelling salts, it is deemed illegal in boxing for that very reason. Despite the controversy inside the ring, the decision held up establishing this title fight with JoJo Diaz.

I believe no amount of smelling salts is going to help Rakhimov inside the ring come Saturday.  This isn’t only a step up in competition for the prospect, it a full flight of stairs.  Sure, there’s that chance Rakhimov lands a devastating blow, this is boxing after all and every fighter has a punchers chance.  However, I am more than confident taking the proven skill set and experience of JoJo Diaz over a young power puncher in Rakhimov.  Now, JoJo only has one knockout in his last five fights and I wouldn’t necessarily bet on him scoring a knockout over an undefeated fighter who has never had his chin tested.  I like Diaz to keep the pressure on in this fight and win by unanimous decision here.