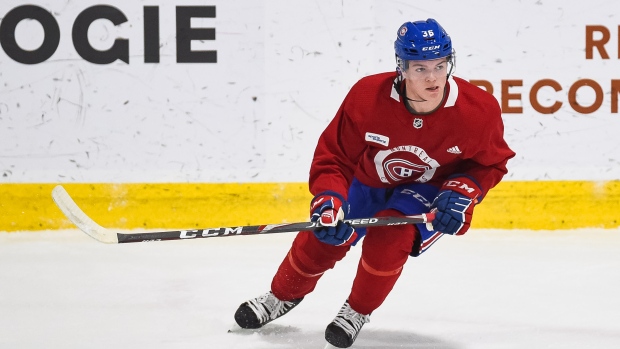 The Montreal Canadiens scheduled forward Cole Caufield for media availability following Friday’s morning skate, leading to speculation that the 20-year-old was closing in on his NHL debut.

Head coach Dominique Ducharme shut those rumors down quickly, stating that the team was making no lineup changes and that Caufield was speaking because “you guys wanted to talk to him”.

As he continues to practice on the team’s taxi squad, Caufield is grateful for the opportunity he’s been given and promises to be ready when he makes his much anticipated debut.

“I think I’m in a great spot here. Getting to practice and be around these guys and the coaching staff. They know what they’re talking about.,” Caufield said following Friday’s morning skate. “I’ve been pretty lucky to have this time and I’m just trying to make the most of it.

“If that opportunity comes, I’ll make the most of it. But the opportunity I have right now is pretty special too.”

Calls for Caufield to make his debut have grown louder as the Canadiens’ offensive struggles continue. The team is 5-7-0 in April and is averaging just 2.16 goals per game this month. The power play is also mired in a 3-for-33 slump as the Habs fight to maintain an eight-point lead on the Calgary Flames, their opponent Friday night, for the fourth and final North Division playoff spot.

Getting the Stevens Point, Wisconsin native into the lineup will be tricky, as the team is tight against the salary cap and can only call up one more player from the minor leagues or taxi squad.

However the Habs decide to manage the roster, Caufield is committed to the team’s vision and plan for his development.

Caufield scored 30 goals in 31 games this season at the University of Wisconsin and won the Hobey Baker Award, an honour given to the best player in the NCAA.

Ducharme says the coaches have had a discussion with the young forward, encouraging him to soak up everything he can at the NHL level, even if he isn’t playing.

“We had a discussion with Cole to soak everything in. The practices, morning skates, the game days, the league, the travel,” said Ducharme. “He’s spending time and working on the ice with NHL players. Right now that’s the situation and nothing has changed.”

The approach has paid dividends for Caufield, as he believes his experience with a veteran NHL group has helped him pick up what he needs to find success when he gets his chance in the lineup.

“I’ve benefited a lot from being able to watch in person and I’ve picked up on a lot of things,” said Caufield. “I feel comfortable out there in practice and being able to educate myself watching the games in person has been big for me.

“I’ve always tried to watch the game as more of a learner. Being able to watch with guys like [Brendan Gallagher] is special. Being able to see the full picture is pretty important to me.”