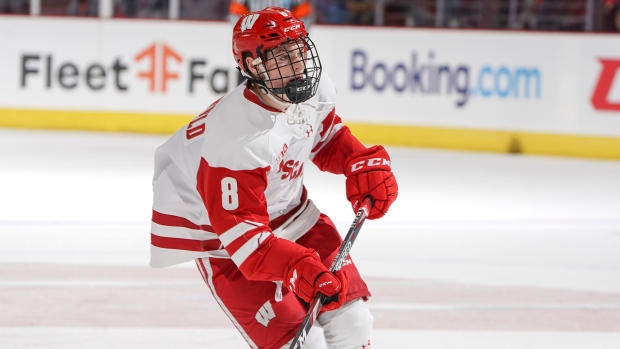 The Hobey Baker Memorial Award Committee announced today the 2021 recipient of college hockey’s top individual prize is Cole Caufield from the University of Wisconsin. The announcement came during a live broadcast on NHL Network and https://t.co/jiQDB4jGhc. pic.twitter.com/oQ7qEbXNos

Caufield was announced as the winner on Friday, getting the nod over North Dakota forward Shane Pinto and Minnesota State goaltender Dryden McKay.

Caufield, selected 15th overall in the 2019 NHL Draft, scored 30 goals and 52 points in 31 games with the Wisconsin Badgers to lead all collegiate players.

His college career ended in late March when the Badgers were eliminated in the first round of the NCAA playoffs by Bemidji State, allowing him to sign a three-year, entry-level contract with the Canadiens and move up to pro.

The 20-year-old forward — known to his teammates as "Goal Caufield" — didn't hesitate to make an impact at the next level, scoring in his professional debut Friday with the American Hockey League's Laval Rocket, Montreal's minor league affiliate.

The five-foot-seven, 162-pound right winger won gold with the United States at the 2021 world junior hockey championship, and is the U.S. national team development program's all-time leader in goals with with 126 goals in 123 games over three seasons before joining the Badgers in 2019-20.

The native of Stevens Point, Wis., was also named Big Ten Play of the Year.

This report by The Canadian Press was first published April 9, 2021.