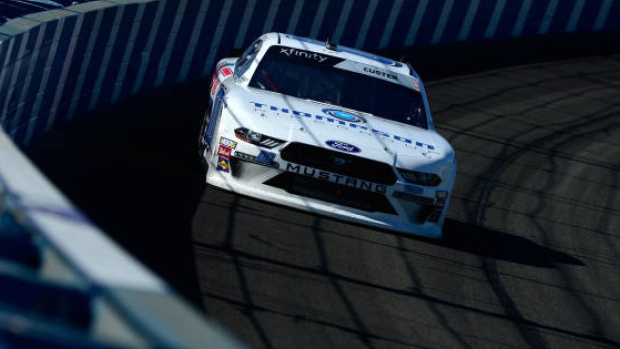 The 21-year-old Custer capitalized when a disastrous pit stop dropped Busch to 14th place with 33 laps to go in a race Busch had dominated up to that point. Although Busch charged back through the field, he couldn't catch up to Custer, who drove his Stewart-Haas Racing Ford to his third career Xfinity victory on his home track.

"You definitely look in the mirror and you see that black car, and you're just hoping it doesn't get bigger," Custer said.

"I grew up racing about 20 minutes from here, (so) it means a lot to come back here and win," Custer said. "Every driver wants to win here because of how cool the track is, but also because it's a hometown track, it means a lot to me. ... Kyle, he's got to be one of the legends of our sport To keep him (waiting) one more race for that 200th win is pretty great. I know he's probably pretty frustrated, though."

Thanks to a pit stop that included a jack mistake and an uncontrolled tire penalty, Busch missed his first chance to match Petty's hallowed mark despite leading 98 of the 150 laps. He'll get another opportunity when he competes in the Cup Series race at Fontana on Sunday.

"When you have a fast guy out front and a fast guy in second, they run the same times and they stay the same distance apart," Busch said. "We just weren't quick enough there at the end to chase them down. ... We'll see what happens (Sunday)."

Christopher Bell was third after Custer passed him for the lead with 19 laps to go.

Cup regular drivers had won 23 consecutive Xfinity series races at Fontana since 2002, but Custer broke the streak at the expense of Busch and Ryan Preece, who finished eighth.

"I felt like we were honestly pretty good," Custer said. "It was just a matter of getting the track position and getting a tick better, and I think we accomplished all of that."

Busch clearly was the class of the Fontana field under serious gusting wind on the weathered 2-mile asphalt track one hour east of Los Angeles. He led each of the first two stages and was cruising toward his landmark win — but he lost seven spots of track position when his crew had a painfully slow pit stop with 35 laps to go, making a mistake with the jack.

Busch's team was then hit with a penalty for an uncontrolled tire, pushing Busch back to 14th when the race resumed. He moved up to second with 15 laps to go, but he just couldn't catch Custer.

"They didn't get the jack high enough and they couldn't get the tire off," Busch said. "We lost track position there and we had an uncontrolled tire on the same stop and had to go to the back, and (we) rebounded. That's all there is to it."

Busch started second and took the lead with a side draft on the opening lap of the Xfinity race on Saturday, and he only briefly gave back the lead before reclaiming it and finishing the first stage in front by a healthy 5 seconds. He also led after the second stage, and he stayed in front under pressure from Tyler Reddick before the field slowed up in two cautions, leading to the decisive pit stop.