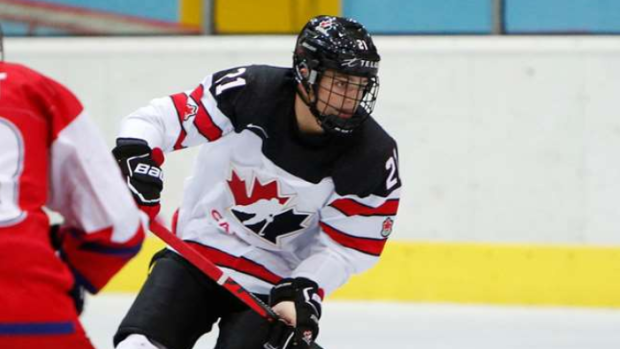 Team Canada practised inside the Edmonton bubble on Sunday.

"I tried to watch the first game and every time I looked at the screen it was just a constant reminder that I got cut and it's hard to do that to yourself and sit through the pain," the Saginaw Spirit forward admitted​. "I kept up on it on Twitter and stuff, but didn't really watch it. I couldn't bring myself to watch it knowing I was so close to that team and came up short."

It's not easy for draft-eligible players to make Team Canada so there was no shame in falling short at the selection camp. But it was still the first time Perfetti had ever been cut before so it stung. The Whitby, Ont. native channeled his disappointment into motivation, producing 66 points in the final 32 Ontario Hockey League games of the season.

"I never want to feel that again," he said. "I remember it whenever I need a boost. I did everything in my power the rest of the season in Saginaw and in the off-season in preparation to come to this camp and do whatever it takes to make this team."

Perfetti made the team and is now poised to play a prominent role. The Winnipeg Jets first rounder has been skating at left wing on a line with returning player Connor McMichael and Peyton Krebs.

"There's an elite level of skill on that line as well as speed and sense," said assistant coach Michael Dyck. "Those guys have been playing together for just under a week now and they seem to be getting better in every situation and every time out. Mikes has got some experience in this tournament and we look upon him for some leadership and some guidance for a young guy like Perfetti and then Krebsie has some experience being in the [NHL] bubble with Las Vegas so they're a real good mix. All three guys are real smart hockey players."

McMichael referred to the group as Canada's "third line" and said he expected them to take advantage of favourable match-ups. Perfetti (111 points) and McMichael (102 points) finished second and third in OHL scoring last season.

"I'm more of a pass-first guy and he's more of a shoot-first guy so we will complement each other well," noted Perfetti. "It's a pretty special line. Mikes can shoot the puck and make plays and Krebsie's got that offensive ability as well but also that workhorse mentality and​ he gets on pucks and does the right thing. So, we all bring different things to the table and we've been meshing well in practice."

McMichael scored five goals at the World Juniors last year and is among the best finishers in junior hockey.

"He can put it anywhere he wants and on demand," Perfetti said. "Some guys have good accuracy, but they still miss their shot, but he doesn't miss."

And Perfetti, with his incredible vision, may be the perfect set-up man for Canada's sniper.

"He's just so intelligent," McMichael raved. "These days the game is so fast-paced and he's able to slow it down and see plays before they develop so it's a treat to be playing with him."

"Anybody can make plays in open ice," Dyck said, "but he does a really good job of making plays in traffic."

"I try to keep it simple," Perfetti explained. "I like to suck pressure in and distribute to the open man. Playing with this line, those guys are always finding open ice and it's easy to play with them and find them."

Perfetti is at his best when he has something to prove. So, now that he's made Team Canada and has been handed a plum line assignment, what's keeping him fired up?

"There's lots of things that will drive you," he said. "The biggest thing is a gold medal. That's my dream and it has been that since I was little watching Team Canada win gold. But then there's a lot of things externally that will drive me. One might be the draft."

Eight of the nine players selected before Perfetti in October will be playing at the World Juniors, including Germany's Tim Stuetzle, who Canada will face on Boxing Day. ​

"I want to prove to all the guys here that I'm just as good or better than them," Perfetti said. "Every game I go out there I want to be the best player on the ice and make a difference so I'm going to use that as motivation."

Most of Canada's forwards play centre so some have had to move over to the wing at the World Juniors. Kirby Dach started camp at centre, but has shifted to the right side on the top line with centre Dylan Cozens.

"It's quite a bit different," said Canada's captain. "You have different responsibilities in the defensive zone and different jobs. It's something I'm still learning and trying to adapt to. Obviously, with how stacked we are down the middle and how many guys play centre on their club teams, guys are going to have to move to the wing and I'm more than fine moving to the wing to give other guys looks at playing centre. I played a little bit of wing at the Hlinka Gretzky Cup and then in Chicago last year I played on the wing the odd time. It's a little bit of a transition, but I think it's easier to go from centre to wing than it is wing to centre."

McMichael, meanwhile, started out on left wing at camp before moving to the middle in the final scrimmage.

"My biggest attribute is my hockey sense and being able to be around the ice and supporting teammates," the Capitals 2019 first rounder said. "I'm able to generate more speed in the neutral zone as a centre. I think it fits my game a little more than the wing. If I had to pick one position it'd be centre, but if [head coach Andre Tourigny] decides to put me on the wing I'm fine with that as well."

Team Sweden named Philip Broberg captain on Sunday. The Skelleftea defenceman will lean on his experience this summer in the NHL bubble with the Edmonton Oilers as he aims to lead Sweden to its third ever World Junior title.

"Being around those NHL guys and seeing how they prepare and execute both in game and outside of the ice, I brought a lot of that to Skelleftea and gained some experience there as well," the 19-year-old said. "I've become a better player and all-around player as well."

Broberg suited up in Edmonton's exhibition game in the bubble and cited that as a big boost to his development.

"T​he practice game that I got to do against Calgary was really special for me. To be able to compete against NHL-level players and see how big of a difference it really is [was important]."

Broberg logged 11 minutes and 19 seconds of ice time as the Oilers beat the Flames 4-1. He has eight points in 23 games this season in the Swedish Hockey League.

"His skating is unbelievable and he looks good," observed Swedish winger Lucas Raymond. "He's had a really good year so far at Skelleftea. He's a really important player for us and I think he'll make a big impact."

"He's a leader for our group both on and off the ice," said head coach Joel Ronnmark, who replaced Tomas Monten after he tested positive for COVID-19 during the Swedish camp. "He's not shy to talk to the group verbally and set a standard in our practice and how we're going to play. He's a really good player for us. We can use him in every situation and we will."

It's been a rocky road to the World Juniors for the Swedes who have lost four players and part of the coaching staff due to positive tests prior to travelling to Edmonton. Then two staff members tested positive inside the bubble leading to an extended quarantine for most of the group. Ronnmark credits Broberg for stepping up and keeping the group together during this early adversity.

"He's one year older from last year and this is his third World Juniors," Ronnmark pointed out. "I feel like for a young guy he's really mature and you can see it on the ice in Skelleftea but also as a person and the relationship I have with him from the last three seasons. I really feel he's a mature young man."

Team Sweden will see most of their players get out of quarantine on Monday with a practice scheduled for the late afternoon.

They may not be playing many games at camp, but Team Canada is doing pretty much everything else on the ice these days. Sunday's 90-minute session featured lots of five-on-five work plus a special teams session and then six-on-five reps, three-on-three play and a shootout.

"One of the things we've been impressed with the most is the level of focus and the fact guys haven't been rattled by the number of adjustments we've had to make," said Dyck. "Our practices have been great, but nothing can replace the game. There's situations in a game that you'll see only in games. We try and simulate as much as we can, but we certainly miss games."

After holding four intra-squad scrimmages during the selection camp, Canada will play one pre-tournament game on Wednesday against Russia.

Before the three-on-three session on Sunday, Tourigny urged his players to not take unnecessary risks and trust that the depth of the team will win out. The players were also reminded that the gold-medal game will be decided by continuous three-on-three play if tied after regulation.

There was a scary moment when Prince George goalie Taylor Gauthier appeared to take a shot to the back of the helmet while sprawling to make a save. After getting some attention he was able to continue in practice.

Here’s three of the goals 👇 pic.twitter.com/5BIPkWyn7p

Lines at Canada’s practice on Sunday: