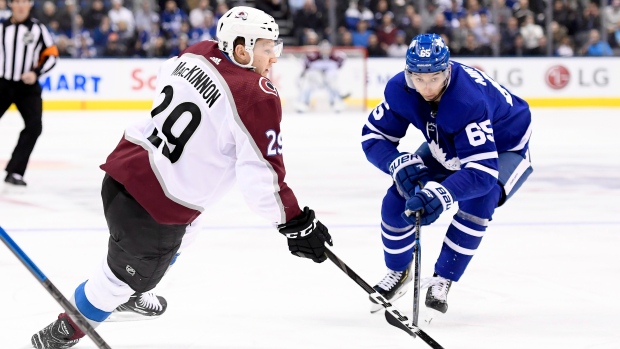 Colorado Avalanche centre Nathan MacKinnon said Wednesday he has no regrets over signing his seven-year deal in 2016 despite the contract being seen as possibly the most team-friendly in the league.

“I was just excited to get paid that much money at such a young age,” MacKinnon told Forbes. “Obviously it’s pretty (team) friendly now, but I was worth that at the time… I have no regrets.”

MacKinnon, who signed his deal after posting 21 goals and 52 points in his third NHL season, will carry a $6.3 million cap hit through the 2022-23 season. He's emerged as one of the league's top centremen since signing the deal, posting career-high 41 goals and 99 points last season.

He admitted Wednesday that rolling the dice on a two-year bridge contract back in 2016 would have been a lucrative move as his point total spiked to 97 from 53 in what would have been his contract year.

“So that would’ve been decent,” MacKinnon deadpanned.

This season, the 24-year-old has 18 goals and 44 points through 27 games and is on pace for 55 goals and a whopping 134 points over 82 games. He currently sits tied for third in the NHL scoring race behind Connor McDavid, who carries a $12.5 million cap hit, and his teammate Leon Draisaitl, who carries a $8.5 million salary. MacKinnon is tied in the race with Boston Bruins winger Brad Marchand, who carries a similar salary of $6.125 million.

Despite owning just the 82nd highest salary in the league and having been passed on his on team's payroll by Mikko Rantanen ($9.25 million AAV) this summer, MacKinnon said he'd be prepared to leave money on the table once again in 2023.

“We have guys that we wouldn’t (otherwise) be able to bring in,” MacKinnon said. “On my next deal, I’ll take less again. Because I want to win with this group.”