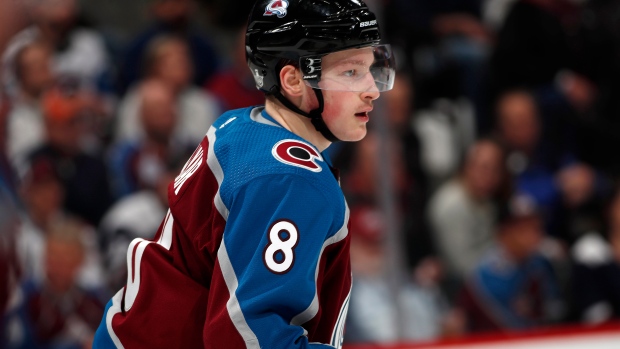 A familiar bearded face is going back to Columbus, and the Blue Jackets' longest tenured player is off to Philadelphia.

The player the Flyers got back? Well, Cam Atkinson is already in love with Philly’s favorite, familiar orange-bearded face.

The Flyers sent Jakub Voracek to the Blue Jackets for Atkinson on Saturday, the first major trade on the second day of the NHL draft. The moves are expected to keep on coming during a busy offseason.

Atkinson wasted no time showing his allegiance to his new team, wearing a Gritty T-shirt on a video call only 30 minutes after the undersized winger with scoring pop was shipped to the Flyers. The shirt is his wife's — a gift from best friend and former Flyers forward Scott Hartnell.

“Everything is all aligned perfectly,” Atkinson said. "We’re ready for this. Couldn’t be more excited.”

Voracek, who turns 32 in August, returns to the team that drafted him in 2007 after a much-needed split with the Flyers, with whom he spent the past 10 seasons and put up 604 points in 727 regular-season games. After the trade, he posted to Twitter a link to Warren Zevon's song “Keep Me in Your Heart" and called it a bittersweet development.

“The Flyers decided to go this way,” Voracek said on a video call with reporters. “I kind of had a feeling if something’s going to pop up for them that I’m going to get traded and I was open to it. I know how it works."

Atkinson did not ask for a trade but feels like this could not have worked out any better for him. He leaves the only NHL organization he has ever been with after scoring 213 goals in 627 games with the Blue Jackets and never getting past the second round of the playoffs.

“It gets to a point where losing isn’t fun," Atkinson said. "Who knows how the Blue Jackets are going to do this year? It’s pretty obvious what they’re trying to do right now. To see all my best buddies leave, that was tough to say the least.”

“Adding a player like that comes at a cost,” Kekalainen said. "I want to thank Cam Atkinson for his many contributions to the Blue Jackets and Columbus community over the past 10 years.”

It’s Philadelphia’s second major trade in two days after acquiring defenseman Rasmus Ristolainen from Buffalo for the No. 14 pick this year and a 2023 second-rounder. After taking on Ristolainen's big contract, GM Chuck Fletcher saved more than $2 million in cap space by swapping Voracek for Atkinson.

The Sabres continued their organizational fire sale by trading disgruntled forward Sam Reinhart to Florida for goaltending prospect Devon Levi and the Panthers' 2022 first-round pick. Reinhart is a five-time 20-goal-scorer and has totaled 134 goals and 295 points in 454 games — all in the regular season since Buffalo hasn't made the playoffs in his seven-year career.

Reinhart, a 26-year-old restricted free agent, will get a chance for a fresh start with a playoff contender.

“Sam has established himself as one of the best playmaking scorers in the league, and we are thrilled to be able to add him to our Panthers lineup,” Panthers GM Bill Zito said. “His competitiveness and hunger to succeed will fit seamlessly with the culture we are building here in South Florida.”

And Sabres GM Kevyn Adams might not yet be done dealing. Captain Jack Eichel is also on the trade block in Adams’ bid to start fresh by overhauling a team that finished last in the standings for the fourth time in eight years and in the midst of an NHL record-matching 10-year playoff drought.

Before the second day of the draft got underway, the Colorado Avalanche signed top defenseman Cale Makar to a $54 million, six-year contract that will count $9 million against the salary cap through the 2026-27 season.

His deal comes on the heels of Chicago acquiring Jones from Columbus and extending the star defenseman for $76 million over eight seasons and Dallas inking Miro Heiskanen to a $67.6 million, eight-year contract.

Makar was a point-a-game player last season, his second in the NHL, and the 22-year-old has 94 points in his first 101 regular-season games. He's set to make $8 million next season, $9 million in the second year, then $11 million, $10.6 million, $8.7 million and $6.7 million as part of a contract that takes into account the expected rise of the salary cap.

“We wanted something that would work and be realistic, as well,” Makar said. “I know this is a team that has the potential to win and win now, and obviously you don't want to kind of get in the way of any of that.”

While the second round was going on, the New York Rangers completed a buyout of defenseman Tony DeAngelo and Edmonton completed a $4.4 million, two-year deal with 39-year-old goaltender Mike Smith.

"We have some unfinished business to do," Smith said. "I really want to do everything I can to help this team win a Stanley Cup in Edmonton.”