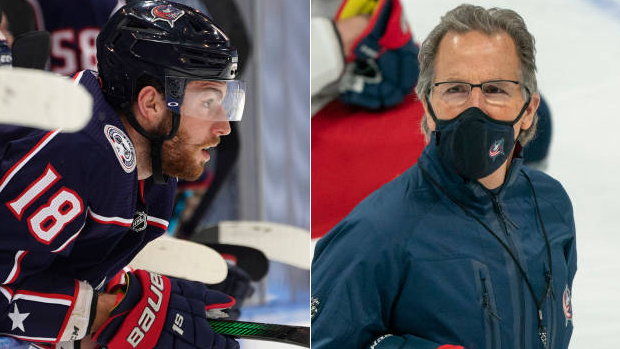 Columbus Blue Jackets head coach John Tortorella vowed to reporters Monday that, "You'll know when I bench someone," and it was clear for centre Pierre-Luc Dubois on Thursday.

Dubois finished with just 3:55 of ice time in Thursday's overtime loss to the Tampa Bay Lightning, failing to see the ice again after appearing to give up on a puck battle in the offensive zone in the first period.

After the loss, Tortorella said it's up to the players to earn their minutes by playing "the proper way."

"I really don't make decisions as far as minutes. It's up to the player to show me," Tortorella said, per Fox Sports Columbus. "If there's one thing I'm pretty easy to read on is the minutes. You're going to get out there if you play the proper way. ...The onus is on the player. And it's on all players - not just the player we're talking about here that sat. It's all the players. I'm not a hard guy to read as far as that's concerned."

The 22-year-old centre requested a trade from the Blue Jackets after signing a two-year, $10 million contract in the opening days of training camp, but Tortorella said his request had nothing to do with being benched on Thursday.

"I've coached Luc like this for a couple years, as far as trying to get him to get some growth in his game and growth as a pro," Tortorella said. "Nothing changes here. ... I think you're asking the wrong guy. I'm just a coach trying to make it work with a hockey club, trying to find a way to win games. The person that you keep talking to me about, you should ask him."

TSN Hockey Insider Pierre LeBrun reports some teams who are interested in Dubois intend to circle back to Columbus "pretty soon" as events continue to unfold.

Some teams who are interested in Dubois intend to circle back to Columbus pretty soon... everyone is watching this unfold https://t.co/h6kpXAq2gd

Dubois was requested for post-game interviews, but he declined through a club spokesman.

When asked about the situation, captain Nick Foligno said he and Dubois have had conversations behind closed doors.

“We’ve had our talks with Luc,” Foligno said. “He’s one of us until told otherwise. We’ve said that out loud, and that’s the way it is. We don’t treat him any differently.

“You guys are looking for a big story. He didn’t play tonight, so I get that tensions are high. But for us, I’ve got 20 other guys on the team to worry about.”

Tortorella said the trade request has not had an impact on team chemistry.

"We're fine. The room's fine." Tortorella added. "We've been in this situation before with a couple other guys. Yeah, we are ... It's a transparent group."

""You guys are really dissecting this benching and sitting," Tortorella said on Monday. "I guess I benched Max [Domi] the other night, you said. Slow down, boys. You'll know when I bench someone. I have to make decisions when the game is being played, when I think someone is going at certain times. But don't try to manifest something as far as the benching. That's all part of a three-period hockey game."

Selected third overall in the 2016 NHL Draft, Dubois has one goal and is minus-2 through five games this season.