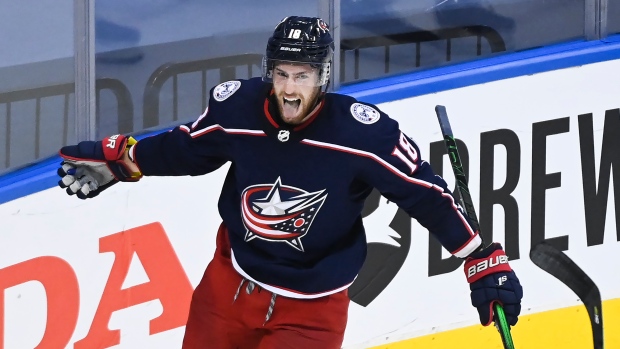 The Winnipeg Jets have acquired forward Pierre-Luc Dubois and a 2022 third-round pick from the Columbus Blue Jackets in exchange for forwards Patrik Laine and Jack Roslovic in a blockbuster swap.

The Jets are retaining 26 per cent of Laine's salary.

A trade call is being set up between the Winnipeg Jets and Columbus Blue Jackets to complete trade sending Laine and Roslovic to Columbus for Pierre Luc Dubois. A draft pick to the Jets May also be included.

Dubois had one goal with the Blue Jackets through five games this season.

On Jan. 13, Blue Jackets head coach John Tortorella revealed that the Ste-Agathe-des-Monts, Que. native requested a trade from the team, two weeks after Dubois signed a two-year, $10 million deal with the club as a restricted free agent. Tortorella said there was no reason given as to why Dubois wanted out.

"This is a 22-year-old kid," Tortorella told 97.1 The Fan in Columbus. "It doesn't happen that often, so he has been honest with the group. I wish he was a little bit more honest as far as reasons why. I still haven't really gotten to that, but I think he needs to speak on that. I won't."

After posting 18 goals and 31 assists in 70 games during the 2019-2020 regular season, Dubois was a point-per-game player in the playoffs, scoring four goals and adding six assists in 10 postseason contests.

Laine has appeared in just one game for the Jets this season due to an upper-body injury and is currently on the injured reserve. He has two goals and one assist so far in 2020-21.

A restricted free agent, Roslovic has signed a two-year, $3.8 million contract with Columbus.

A Columbus, OH. native, Roslovic was drafted in the first round (25th overall) at the 2015 NHL Draft.