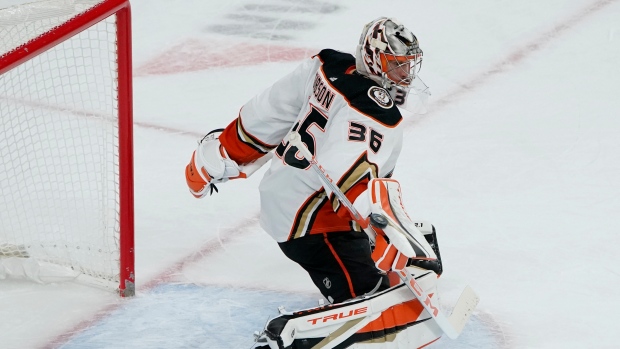 LAS VEGAS — Max Comtois grew up watching the Pittsburgh Penguins and was a big fan of goaltender Marc-Andre Fleury.

After they crossed paths Thursday night, Fleury probably is no fan of Comtois, who scored in the third period to lift the Anaheim Ducks to a 1-0 victory over the Vegas Golden Knights.

Rickard Rakell gathered the puck from behind the net and fed Comtois, who snapped it past Fleury with a one-timer at 12:18 of the third.

“The goalies are good in this league,” Comtois said. “As long as I shoot quick I have a chance to beat them.”

“We’ve had games earlier this year with a lead or even when it’s tied, and we’ll start to back up and defend and we don’t want to do that,” said coach Dallas Eakins, whose Ducks have lost six one-goal games this season. “We want to press ahead, and our guys did a good job of that tonight.”

John Gibson made 21 saves for his 22nd career shutout, passing Jonas Hiller for third on the franchise list.

Gibson, who withstood a late sequence when Vegas pulled Fleury for an extra skater, is one of three goaltenders in the NHL with at least 10 starts to boast a save percentage of .923 or higher.

“I thought we really protected him well through two periods,” Eakins said. “At the end, when it’s 6-on-5, that puck is bouncing all over our crease and coming out from behind the net, he’s excellent. I’ve always thought, and this is way before I was ever a coach here, John Gibson is not recognized enough by the rest of our league. He is a top, top goaltender. When we needed him tonight, he showed that very well.”

Gibson and Fleury — the Pacific Division goalies in the 2019 NHL All-Star Game — were both brilliant in their own right to keep the opposition off the board.

The Ducks had not reached double digits in shots in any period against the Golden Knights in the first three meetings, but had Fleury working early by outshooting Vegas 13-4 in the first.

Fleury made a pad save on Ryan Getzlaf midway through the period, and Gibson blocked Jonathan Marchessault’s sharp backhand near the end of the first.

The Ducks had their best chance at the midway point of the second, when Isac Lundstrom and Comtois raced into the zone against Alex Pietrangelo on an odd-man rush. Drawing Pietrangelo toward him, Comtois fed Lundtsrom as he skated in front of the net, but in full splits, an outstretched Fleury sprawled backward to his left to make one of his patented acrobatic saves.

The stingy goaltending continued in the third, as Getzlaf raced in on a breakaway with a little more than 13 minutes left and fired a backhand that Fleury smothered to keep the game scoreless.

Fleury’s good fortune ran out with a little less than eight minutes left, when Comtois finally found the back of the net.

“Unfortunate to waste an effort like that — he was our best player,” Vegas coach Peter DeBoer said about Fleury. “Considering the circumstances, he got the call to go in late tonight, it was a great effort by him. I know the guys feel like they let him down tonight.”

Robin Lehner was expected to start for Vegas, as DeBoer has been alternating him and Fleury. DeBoer said Lehner tweaked something at the morning skate and was hoping it was minor and he’d be able to come to the game without any issues, but that wasn’t the case. Oscar Dansk was Fleury’s backup goaltender.

Eakins coached his 199th career game and is scheduled to reach 200 in San Jose on Monday.