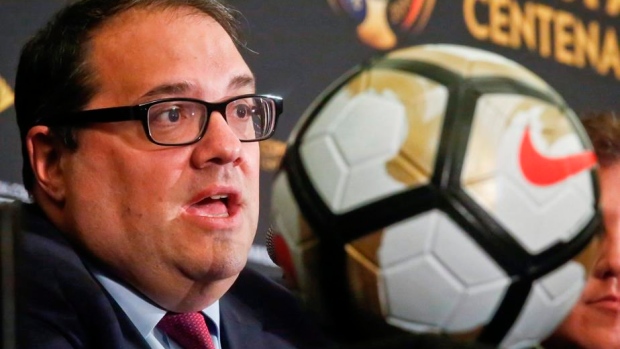 TORONTO — No decision has been made yet but CONCACAF president Victor Montagliani expects Canada to get an automatic berth — along with co-hosts Mexico and the U.S. — for the 2026 World Cup.

"That's my expectation and we'll be pushing for that," Montagliani said in an interview Wednesday. "I don't see the rationale not to have it, quite frankly.

"The only number is three or zero," added the Vancouver native, who was in Toronto to lay out his vision at an Empire Club of Canada event. "I can't see zero being a logical number. And one and two, how can you do that? But there's a process there and it's not on the front-burner because we've still got another World Cup (in 2022 in Qatar) to worry about qualification."

Host countries traditionally get an automatic berth and skip qualifying. But 2026 will mark the first time the soccer showcase has three host countries.

Montagliani says CONCACAF, which covers North and Central America and the Caribbean, could have as many as eight countries at the 2026 tournament. CONCACAF will get 6 1/2 slots plus another half (the halves refer to qualifying series with teams from another confederation).

CONCACAF got 3 1/2 slots for the 2018 World Cup in Russia, which featured 32 entries. The top three teams in the final round of regional qualifying — Mexico, Costa Rica and Panama — made it to Russia while No. 4 Honduras lost an inter-confederation playoff with Australia 3-1 on aggregate.

The current blueprint calls for Canada and Mexico to host 10 games each with the U.S. hosting 60, including all games from the quarterfinals on.

"Listen I can tell you from a FIFA perspective — I'll put my FIFA hat on — this is not a United States World Cup. And anybody that says that is delusional. This is a United Bid World Cup between three countries, with so many games in the U.S., so many games in Canada and so many games in Mexico. That's it," Montagliani said in a question-and-answer session with the Empire Club of Canada.

"It's not a U.S. World Cup, it ain't a Mexico World Cup and it ain't a Canada World Cup. It's together ... It truly is a regional World Cup."

Such combined bids are growing in popularity, he noted. Argentina, Uruguay and Paraguay are bidding for the 2030 World Cup and England is looking at joining forces with Scotland, Wales and Northern Ireland. Spain, Portugal and Morocco are also considering a joint bid.

Montagliani said CONCACAF and Canada have to ensure that the 2026 World Cup "is not just a tournament in June and July of 2026."

"There's things already that Canada can be doing," said Montagliani, who met with Toronto Mayor John Tory in the morning. "Everybody wants to get busy with their own provincial championships and their own little club and that's all great.

"But I think the leaders of the sport in this country need to wake up, that there is an opportunity and you need to start galvanizing together. You've got to have the corporate world come in in conjunction with the football community, with the (Canadian soccer) federation, with the cities. It has to be all in concert so that you can maximize every opportunity you can, so that the sport becomes what it can be after the World Cup and not just the legacy of an event.

"And I think if you can do that, you will see really a different Canada."

Unlike the Olympics or other sporting events, Montagliani argued soccer's World Cup can make a lasting difference given the sport's constant presence at all levels.

"This sport has an opportunity to really nation-build," he said. "I think this is what we have to realize in this country."

Toronto, Montreal and Edmonton are the Canadian cities that have been put forward to host 2026 tournament games.